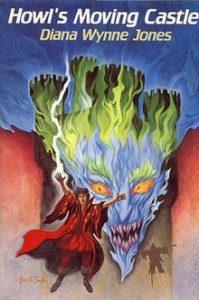 Sophie has the great misfortune of being the eldest of three daughters, destined to fail miserably should she ever leave home to seek her fate. But when she unwittingly attracts the ire of the Witch of the Waste, Sophie finds herself under a horrid spell that transforms her into an old lady. Her only chance at breaking it lies in the ever-moving castle in the hills: the Wizard Howl's castle. To untangle the enchantment, Sophie must handle the heartless Howl, strike a bargain with a fire demon, and meet the Witch of the Waste head-on. Along the way, she discovers that there's far more to Howl - and herself - than first meets the eye.

Howl's Moving Castle (Hauru no Ugoku Shiro) is a 2004 Japanese animated fantasy film written and directed by Hayao Miyazaki. The film is loosely based on the novel of the same name by British author Diana Wynne Jones. The Japanese voice cast featured Chieko Baisho and Takuya Kimura, while the version dubbed in English starred Jean Simmons, Emily Mortimer, Lauren Bacall, and Christian Bale.

If you're looking for another magical adventure, these books have just what you need.