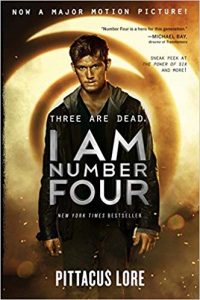 In rural Ohio, friendships and a beautiful girl prove distracting to a fifteen-year-old who has hidden on Earth for ten years waiting to develop the Legacies or powers, he will need to rejoin the other six surviving Garde members and fight the Mogadorians who destroyed their planet, Lorien.

I Am Number Four

If you want another exciting sci-fi tale of aliens hidden in plain sight on Earth, check out these young adult titles.

When 100 juvenile delinquents are sent on a mission to recolonize Earth, they get a second chance at freedom, friendship, and love, as they fight to survive in a dangerous new world.

High school senior Cara Sweeney gets more than she bargained for when she agrees to participate in earth's first intergalactic high school exchange program.

For a century now, Earth has been a peaceful colony of an alien race, and Donovan Reyes is a loyal member of the security forces, while his father is the Prime Liaison. But when a routine search and seizure goes bad Donovan finds himself a captive of the human revolutionary group, Sapience, terrorists who seem to prefer war to alien rule, and killing Donovan just might be the incident they are looking for.

Rochester, New York, high schooler Miki Jones is pulled into a sort of a game in which she and other teens battle real-life aliens and the consequences of each battle could be deadly.

On a secret mission to evaluate whether the human race should be annihilated, a space alien inhabits the body of a bullied fourteen-year-old boy.

View more suggestions for I Am Number Four.