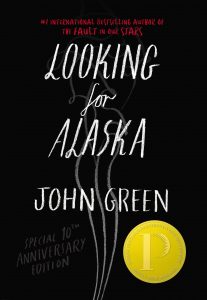 Looking for Alaska by John Green
Sixteen-year-old Miles' first year at Culver Creek Preparatory School in Alabama includes good friends and great pranks but is defined by the search for answers about life and death after a fatal car crash.

Looking for Alaska is an upcoming American teen drama web television miniseries on Hulu. It will premiere on October 18.

Like Green's masterpiece, these harrowing stories are told through the eyes of teenagers suffering unmeasurable pain, and what it took them to reach an ending.

While Sloane shares a drunken kiss with her best friend Piper's boyfriend Soup, Piper is murdered on a nearby beach, and over the next few days, Sloane and Soup are left reliving their past moments with Piper, wondering if they are responsible for her death and figuring out how to move on without her.

Since the car accident, Samantha Herring has been in constant pain, not only from a lingering leg injury but also from her mother's death, which has devastated her family. Then Sam meets Eliot, a reckless loner with a carefree attitude and an amazing secret: he can't feel any pain.

Ryn, eighteen, trapped by a massive blizzard in the Denver airport, meets some unique characters who help her cope with survivor's guilt on the first anniversary of her best friend's death.

As the first anniversary of her best friend Kim's death nears, fourteen-year-old Emmy tries to fulfill her promise to make contact with Kim's spirit, but she gains new perspective from unexpected connections.

Fifteen months after the accident that killed her best friend Aubrey, Dara is ready to start her senior year of high school. She finds it difficult to see Ethan, Aubrey's brother, and she sees him every day.

Teenagers Rachel and Henry find their way back to each other while working in an old bookstore full of secrets and crushes, love letters and memories, grief and hope.