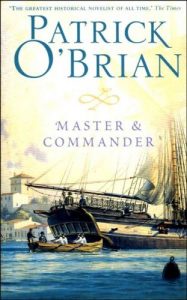 It is the dawn of the nineteenth century; Britain is at war with Napoleon's France. Jack Aubrey, a young lieutenant in Nelson's navy, is promoted to command of H.M.S. Sophie, an old, slow brig unlikely to make his fortune. But Captain Aubrey is a brave and gifted seaman, his thirst for adventure and victory immense. With the aid of his friend Stephen Maturin, ship's surgeon and secret intelligence agent, Aubrey and his crew engage in one thrilling battle after another, their journey culminating in a stunning clash with a mighty Spanish frigate against whose guns and manpower the Sophie is hopelessly outmatched.

Master and Commander: The Far Side of the World is a 2003 American epic period war-drama film. The film's plot and characters are adapted from three novels in author Patrick O'Brian's Aubrey-Maturin series, which includes 20 completed novels of Jack Aubrey's naval career. The film stars Russell Crowe as Jack Aubrey and Paul Bettany as Dr. Stephen Maturin, the ship's surgeon. The film was released on November 14, 2003. The film was critically well received. At the 76th Academy Awards, the film was nominated for 10 Oscars, including Best Picture. It won in two categories: Best Cinematography, and Best Sound Editing.

If you're looking for a book similar to Master and Commander, these historical fiction sea-fearing titles are filled with adventure and shipboard life.

Abigail's owner has outfitted the ship with guns and instructed Jack to fight if need be to keep his ship out of French hands. What Jack does not know, though his passengers do, is that he is being used as part of a bigger plot, one that will have repercussions on an international scale.