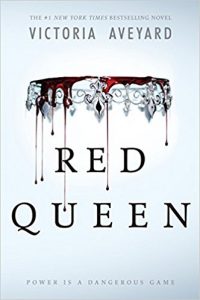 In a world divided by blood - those with common, Red blood serve the Silver-blooded elite, who are gifted with superhuman abilities - seventeen-year-old Mare, a Red, discovers she has an ability of her own. To cover up this impossibility, the king forces her to play the role of a lost Silver princess and betroths her to one of his own sons. But Mare risks everything and uses her new position to help the Scarlet Guard - a growing Red rebellion - even as her heart tugs her in an impossible direction.

If you want more fierce fantastical females, check out these suggestions.

Accident-prone, thirteen-year-old Gorse, the youngest fairy in her family, falls into a trap while on her way to the palace to bless the newborn princess, Talia, but arrives in time to give a gift which, although seemingly horrific, may prove to be a real blessing in this take-off on the classic tale of Sleeping Beauty.

Laia is a Scholar living under the iron-fisted rule of the Martial Empire. When her brother is arrested for treason, Laia goes undercover as a slave at the empire's greatest military academy in exchange for assistance from rebel Scholars who claim that they will help to save her brother from execution.

To free herself from an upcoming arranged marriage, Claudia, the daughter of the Warden of Incarceron, a futuristic prison with a mind of its own, decides to help a young prisoner escape.

Orphaned by the Border Wars, Alina Starkov is taken from obscurity and her only friend, Mal, to become the protegé of the mysterious Darkling, who trains her to join the magical elite in the belief that she is the Sun Summoner, who can destroy the monsters of the Fold.

Orphaned Meira, a fierce chakram-wielding warrior from the Kingdom of Winter, must struggle to free her people from the tyranny of an opposing kingdom while also protecting her own destiny.