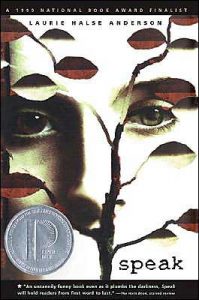 A ninth grader becomes a social pariah when she calls the police to bust a summer bash and spends the year coming to terms with the secret fact that she was raped during the party.

Speak is a 2004 American independent drama based on the award-winning novel of the same name by Laurie Halse Anderson. It stars Kristen Stewart as Melinda Sordino, a high school freshman who practically stops talking after a senior student rapes her. The film is told through Melinda's eyes and is wrought with her sardonic humor and blunt honesty. It was broadcast on Showtime and Lifetime in 2005 after premiering at the Sundance Film Festival in 2004.

The suggested titles below involve the brutal subject of rape, and how a survivor may deal with the emotional and physical impact.