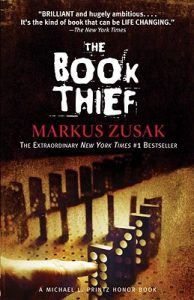 Trying to make sense of the horrors of World War II, Death relates the story of Liesel - a young German girl whose book-stealing and storytelling talents help sustain her family and the Jewish man they are hiding, as well as their neighbors.

The Book Thief is a 2013 film directed by Brian Percival and starring Geoffrey Rush, Emily Watson, and Sophie Nélisse. The film features a musical score by Oscar-winning composer John Williams. The Book Thief received an Academy Award, Golden Globe and BAFTA nominations for its score. For her performance in the film, young Sophie Nélisse won a plethora of newcomer and youth awards for her role as Liesel.

These suggestions are fiction and "based on" accounts of brave Jewish teens during the horrific years of the Holocaust in Europe.