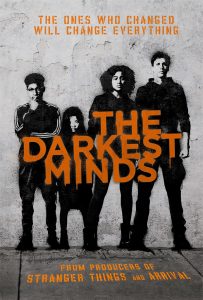 Sixteen-year-old Ruby breaks out of a government-run 'rehabilitation camp' for teens who acquired dangerous powers after surviving a virus that wiped out most American children.

The Darkest Minds is an upcoming American science fiction action film directed by Jennifer Yuh Nelson. The film will be released in theaters and IMAX on August 3, 2018. The film stars Amandla Stenberg, Mandy Moore, and Gwendoline Christie.

If you're looking for more titles involving psychic powers, prison, or brave escapes, check out these young adult books.

Living on a violent planet where everyone develops a unique power meant to shape the future, Akos, and Cyra, youths from enemy nations, resent gifts that render them vulnerable to others' control before they become unlikely survival partners.

In a future world where teenagers are taken, imprisoned, and forced to fight for their survival, well-behaved Cassie will do whatever it takes to save her rebellious twin sister from Death Row.

When Phantoms, or dangerous supernatural beings, suddenly appeared, four girls, the Effigies, each gained a unique power to control one of the classical elements: earth, air, fire, and water. When one Effigy dies, another girl gains her power. Now, with technologies in place to protect the world's major cities from Phantom attacks, the Effigies have become international celebrities, their feats televised and talked about in online fandoms. When Maia unexpectedly becomes the Fire Effigy, and an army of Phantoms prepare for an attack, there isn't much time for the Effigies to learn how to work together before the world is destroyed forever.

To free herself from an upcoming arranged marriage, Claudia, the daughter of the Warden of Incarceron, a futuristic prison with a mind of its own, decides to help a young prisoner escape.

Michael Vey seems like an ordinary teenager, but he has a unique power. After his mother is kidnapped, he and his friends fight the hunters to save other kids with the same powers and Michael's mother.

Seventeen-year-old Fia and her sister, Annie, are trapped in a school that uses young female psychics and mind readers as tools for corporate espionage - and if Fia doesn't play by the rules of their deadly game, Annie will be killed.