Jonas's world is perfect. Everything is under control. There is no war or fear of pain. There are no choices. Every person is assigned a role in the community. When Jonas turns 12 he is singled out to receive special training from The Giver. The Giver alone holds the memories of the true pain and pleasure of life. Now, it is time for Jonas to receive the truth. There is no turning back. 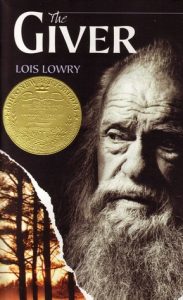 If you like Lois Lowry's The Giver series, check out these other titles for young adults.

In a future where the Population Police enforce the law limiting a family to only two children, Luke has lived all his twelve years in isolation and fear on his family's farm, until another "third" convinces him that the government is wrong.

In a future Chicago, sixteen-year-old Beatrice Prior must choose among five predetermined factions to define her identity for the rest of her life, a decision made more difficult when she discovers that she is an anomaly who does not fit into any one group, and that the society she lives in is not perfect after all.

Celestine North lives a perfect life, in a society in which perfection is paramount and flaws are punished. She's a model daughter and sister, she's well-liked by her classmates and teachers, and she's dating the impossibly charming Art Crevan. When she breaks a rule, she faces life-changing repercussions.

In Saintstone everyone gets tattoos recording their deeds from birth until death, and the ink lets every other citizen know your triumphs as well as your sins; so when Leora's father dies and she sees glimpses a symbol of a horrible crime on the back of his neck she is horrified, and sure it is a mistake--and in her efforts to find out the truth she discovers the lengths that Saintstone will go to preserve its "perfect" society.

Rosie Sinclair, who attends an elite arts school where students are contestants on a high stakes reality show, skips her sleeping pill one night and discovers that the school is really a cover-up for the lucrative and sinister practice of dream harvesting.

View more suggestions for The Giver.