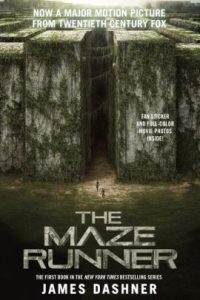 Sixteen-year-old Thomas wakes up with no memory in the middle of a maze and realizes he must work with the community in which he finds himself if he is to escape.

The Maze Runner is a 2014 American dystopian science fiction action thriller film directed by Wes Ball, in his directorial debut. The film is the first installment in The Maze Runner film series and stars Dylan O'Brien, Kaya Scodelario, Aml Ameen, Thomas Brodie-Sangster, Ki Hong Lee, Will Poulter, and Patricia Clarkson. The story follows sixteen-year-old Thomas, portrayed by O'Brien, who awakens in a rusty elevator with no memory of who he is, only to learn he's been delivered to the middle of an intricate maze, along with a large number of other boys, who have been trying to find their way out of the ever-changing labyrinth - all while establishing a functioning society in what they call the Glade.

if you liked the dystopian thrill of The Maze Runner, along with the mystery of identity, check out these titles - both young adult and some adult.