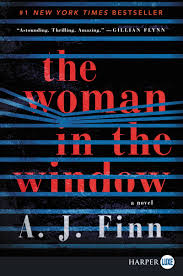 The Woman in the Window by A.J. Finn
Anna Fox lives as a recluse in New York City, unable to venture outside due to her agoraphobia. She spends most days drinking wine, watching vintage movies, recalling happier times with her family . . . she also enjoys being a voyeur, spying on her neighbors from her high rise windows. Then, the Russell family move into the house across the street: a father, a mother, and their teenage son. The perfect family in her eyes. But when gazing into their life one night, she sees something she shouldn't and the world as she knows it begins to crumble. Was what she saw real? Did she imagine it? In this thriller, nothing is what it seems.

The Woman in the Window is an upcoming American mystery thriller drama film directed by Joe Wright. The film stars Amy Adams as Anna Fox, Julianne Moore as Jane Russell, and Gary Oldman as Alistair Russell. The film is scheduled to be released on October 4, 2019.

If you're hungry for another intense psychological thriller, these books will fill the void.

On a dangerous road at night in the middle of a downpour, Cass - taking a shortcut her husband has told her not to take - spies another car on the side of the road with a woman sitting inside. When she finds out the woman has been murdered, she begins to have guilt, and, the most strange of all, she begins to forget everything - where she left her car, if she took her medication, the alarm code . . . the only thing she can't forget is the woman she might have saved. Then the phone calls start. Is someone watching her?

Kate Priddy has always been a bit neurotic - for a good reason. Her bouts of anxiety that turn into panic attacks are caused by an ex-boyfriend kidnapping her, which nearly ended her life. When a distant cousin suggests that he and Kate swap apartments, she agrees, hoping that time in a new place will help her overcome her fear. But soon after her arrival, she discovers that the next-door neighbor has been murdered.

Twins Rose and Bel Enright are positive that the New Hampshire boarding school - The Odell School - is the best move for them. But, before they know it, the sisters find themselves in an intense rivalry with alarming and deadly consequences. Was it the act of a mysterious teacher who will do anything to get ahead in his career, or is there something deeper happening at the school that no one is aware of?

Former journalist Rachel Childs suffered from an on-air mental breakdown and has become a virtual shut-in. However, she's enjoying her life with her husband until one rainy afternoon when her already shaky life begins to fall apart. Sucked into a conspiracy, she must find the strength within herself to conquer her deepest fears.

Lo Blacklock is a journalist who writes for a popular travel magazine. Her current assignment is a dream come true: a week on a luxury cruise ship, the Aurora, sailing on the North Sea. At first, Lo's stay goes perfectly, but as the week goes on the weather takes a turn for the worse and she witnesses what she thinks is a woman being thrown overboard. The problem? All passengers remain accounted for - so, what did she actually see?

View more suggestions for The Woman in the Window.