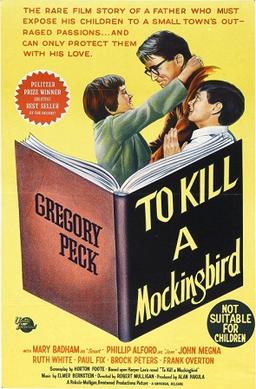 The conscience of a town steeped in prejudice, violence, and hypocrisy is pricked by the stamina and quiet heroism of one man's struggle for justice, in this Pulitzer Prize-winning classic that has been translated into more than 40 languages.

To Kill A Mockingbird

To Kill a Mockingbird is a 1962 American drama film directed by Robert Mulligan. The screenplay by Horton Foote is based on Harper Lee's 1960 Pulitzer Prize-winning novel of the same name. It stars Gregory Peck as Atticus Finch and Mary Badham as Scout. To Kill a Mockingbird marked the film debuts of Robert Duvall, William Windom, and Alice Ghostley. The film received overwhelmingly positive reviews from critics and was a box-office success, earning more than six times its budget. The film won three Academy Awards, including Best Actor for Peck, and was nominated for eight, including Best Picture.

If you're looking for books similar to the themes in To Kill a Mockingbird, check out the suggestions below.

View more suggestions for To Kill a Mockingbird.