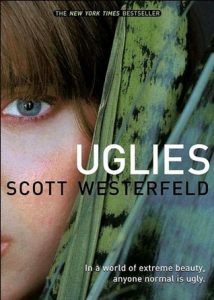 Tally lives in a world where your 16th birthday brings aesthetic perfection: an operation which erases your flaws, transforming you from an 'Ugly' into a 'Pretty'. She is on the eve of this important event, and cannot wait for her life to change. But then she meets Shay, and her whole outlook is different.

If you like the Uglies series, check out these other post-apocolyptic and future world titles.

On a futuristic island paradise where humans are served by enslaved clones, a sixteen-year-old clone named Elysia seeks her own freedom.

As plague ravages the overcrowded Earth, observed by a ruthless lunar people, Cinder, a gifted mechanic and cyborg, becomes involved with handsome Prince Kai and must uncover secrets about her past in order to protect the world in this futuristic take on the Cinderella story.

More than a century after a catastrophic disaster wiped out most of humanity and covered much of the earth with ice, fifteen-year-old Cass yields to the voice in her head urging her to embark on a dangerous journey across a poisoned sea to the mythical land, Blue.

Girls, called "Eves", are raised in schools and trained in the arts of pleasing men until they come of age. Freida and Isabel are best friends. Now, aged sixteen and in their final year, they expect to be selected as companions - wives to powerful men. The alternative is life as a concubine or living in chastity, is too horrible to contemplate. But as the intensity of final year takes hold, the pressure to be perfect mounts. Isabel starts to self-destruct, putting her beauty - her only asset - in peril.

Sixteen-year-old America Singer is living in the caste-divided nation of Illea, which formed after the war that destroyed the United States. America is chosen to compete in the Selection - a contest to see which girl can win the heart of Illea's prince - but all she really wants is a chance for a future with her secret love, Aspen, who is a caste below her.