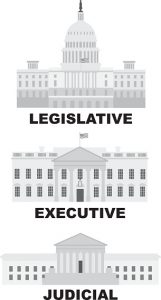 It takes three sets of people—the president, the judges, and the Congress—to make our government work. If the president does something wrong, it's up to the judges and Congress to hold him accountable. If laws are made by Congress that people think are not really fair, the judges can strike them down, or the president can choose to veto them before they become laws. Supreme Court judges are appointed by the president, but they usually stay on long after the president has left office, so as time passes we have a mix of different political views.

This is called a balance of power. It's a sharing of responsibility so that no one group gets too bossy. It's guaranteed by our Constitution, and it's what makes America a great nation.

Learn more online and in the library!

Ben's Guide to U.S. Government for Kids
Here's a guide to government just for kids! Learn about how a bill becomes a law, how the different branches of government work together, and how elections work. Discover historical documents, games and activities. Enter the site by grade level. Different grades have different learning choices.

Congress.gov
This is the real deal: find out what's going on now in Congress. The wording can be heavy and technical, but this site is an extremely accurate way to track legislation that interests you.

How Bills Become Laws
There are national laws and then there are state laws. Read about how bills become laws in the Commonwealth of Virginia.

Online Databases From the CRRL

For more information, use your library card to connect to encyclopedias and magazine articles. We have a special section of databases designed just for kids.

A Balancing Act: A Look at Checks and Balances by Kathiann M. Kowalski
Introduction: a new government with three branches -- Problems with the Articles of Confederation -- Congress at work -- The president and the veto power -- The courts and judicial review -- The states and the people Includes bibliographical references and index

The Federal Government series
Has books on the judicial, executive, and legislative branches as well as volumes on America's security agencies and independent government agencies.

How the U.S. Government Works. by Syl Sobel
Explains the three branches of the federal government--legislative, executive, and judicial--and how they work.

The United States Government Manual
How is the government organized and what are the departments' assigned tasks? This lengthy official publication of the Office of the Federal Register is updated yearly. Also available online.

The Voice of the People: American Democracy in Action by Betsy Maestro
Read all about the three branches of government and how elections and political parties work in America.