When there's a chill in the air and the leaves are starting to turn, that's the time that people think about apple harvests. Virginia is known for its apples, and there are orchards throughout the state that have the delicious fruit in many varieties. There are apple festivals, too, where you can sometimes pick your own apples and even watch people making spicy, dark apple butter. But whenever people talk about how apple trees were spread across America in the early 1800s, there's always one name that comes up. Johnny Appleseed. 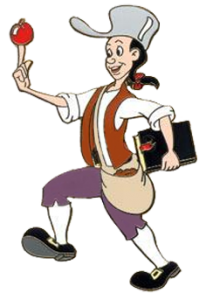 Who Is That Strange-Looking Fella?

If you saw a man walking by your house barefoot, wearing old clothes and with a tin pot on his head, you'd likely wonder where on earth he came from. But if you lived in Indiana or Ohio in the early part of the 1800s, you just might recognize your wandering neighbor, John Chapman, affectionately known as Johnny Appleseed.

He Learned His Trade

John Chapman was born September 26, 1774, in Leominster, Massachusetts. His father Nathaniel Chapman worked as a carpenter for General Washington, and, when Johnny was old enough, he was apprenticed to a nearby farmer to learn to be an orchardist - someone who looks after fruit trees. John Chapman would go on to become the most famous orchardist in American history.

When he was 18 years old, he and his little brother went west into Ohio, taking seeds for free from apple cider mills. Not many people had settled Ohio yet, but John Chapman knew they would be coming. Soldiers who served in the Revolutionary War were being given land for farms. Those farmers would want apple trees. John planted the seeds, raised the trees, and sold them to the new farmers.

Johnny did not scatter seeds randomly as he traveled. He planted proper nurseries with fences around them and would leave the growing trees for the neighbors to sell for him for a part of the profits. He left instructions to sell to the new farmers on credit, or he would take things in barter, such as cornmeal or used clothing, and, yes, cash if they had it.

Why did he leave his orchards for others to tend? He wanted to start more of them. Once an orchard was established, he would check back on it regularly and tend the trees. John traveled barefoot and wearing the oldest of clothes, even though he was really quite wealthy from his orchards. He sold the better clothes that farmers bartered or gave them to the poor.

John Chapman was known for being kind to animals, and he was a very religious man. He passed out religious texts to families who would host him overnight. He never married and looked after himself very simply, either sleeping out in the open or making a shelter for longer stays as the Native Americans might have done. One of his staple (regular) foods was mush - a porridge of cornmeal made with either water or milk and cooked in that tin pot he supposedly always carried with him.

Here is a simple recipe from CooksRecipes.com for a mush that is similar to what Johnny Appleseed might have enjoyed. Be sure to ask for a grown-up's help with the stove.

Stir cornmeal into 1 cup cold water in a bowl.
Bring 3 cups water and the salt to a boil in a large saucepan. Add cornmeal mixture to the boiling water gradually, stirring constantly.
Cook for 5 to 10 minutes or until thickened, stirring frequently.
Serve with sugar and milk or with butter. You could also use a spoonful of apple butter.

John Chapman lived to be a very old man. Accounts differ as to when he died.  Possible dates for his death are March 18, 1845, or the summer of 1847. No one is sure where his grave lies, but his legacy is everywhere in the beautiful apple blossoms of spring and the ripe, sweet apples of autumn.

This booklist has sources for apples generally and John Chapman's life in particular. Click on the title to get to the complete list - with the Johnny Appleseed books.

Annie is a very busy apple farmer. She bakes yummy treats with the apples she picks and saves her most beautiful apples to sell fresh at the farmers' market. Includes three recipes using apples.

Describes an apple tree as it grows leaves and flowers and then produces its fruit, while in its branches robins make a nest, lay eggs, and raise a family. Includes a recipe for apple pie.

Autumn is apple harvest time. Come along on a trip to the apple orchard. Find out how apples are picked and stored. Learn which apples are best for munching. But watch out for the apple worms!

Grab the wagon, it's a bright autumn day and the trees are full of ripe, red apples! There's an apple festival underway at the farm and lots of work to do making cider. This visit finishes with a cider doughnut and a cup of freshly pressed cider. DELICIOUS!

A rhyming book with warm and lovely pictures that tells the story of gentle John Chapman.

This retelling of John Chapman's life and legend is accompanied with glowing illustrations.

These Web sites should also help with homework projects:

Appling, Paula. "The Apple-Seed Man: John Chapman Planted Thousands of Apple Trees as America Moved West." Highlights for Children, Apr. 1998, p. 34+.
This short article is written for a children's audience. It can be accessed through the database Kids Infobits with your library card and pin numbers.

Johnny Appleseed Was Born
A small piece from the Library of Congress has some interesting facts about Johnny.

Wikipedia.com: Johnny Appleseed
This detailed article has footnotes and illustrations.