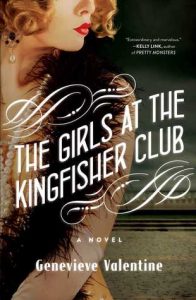 After the horrors of World War I and the resulting social trauma, young men and women who survived came to be known as The Lost Generation because they never recovered from all of their losses and suffering. To deal with their pain, many of them lived by the adage, “Eat, drink, and be merry, for tomorrow we die.” The Roaring Twenties, also known as the Jazz Age, was born.

Financial prosperity in the United States and Western Europe allowed many people to enjoy themselves rather than work long hours. Novelty and technology were central—jazz, Art Deco, moving pictures, automobiles, and airplanes were all fascinating elements in the modern age. New ways of life and thinking led to women receiving the vote and taking up jobs outside their homes in large numbers. Shorter hems and hairstyles became the style.

In the United States, illegal nightclubs and black market alcohol sprang up because of Prohibition. In England, the Bright Young Things, young socialites, and aristocrats with too much money and time on their hands, threw elaborate parties and went on wild treasure hunts, landing in the gossip columns and sometimes on the wrong side of the law. At the same time, writers and social critics, such as Ernest Hemingway, F. Scott Fitzgerald, Gertrude Stein, Sinclair Lewis, and Sherwood Anderson, wrote novels, essays, and plays, criticizing the growing materialism and greed.

In October 1929, the U.S. stock market crashed, and the roaring high life came crashing down with it. Despite this, the 1920s has left us with iconic activities and figures, such as the flappers, speakeasies, talking motion pictures, mainstream jazz, dance clubs, mass transportation, aviation as a business, and sports events, many of which are still part of our current culture.

If you’d like to experience more of life in this exciting time period, check out a book from the Roaring Twenties list.

CRRL My Librarian: The Roaring Twenties

Anne Morrow Lindbergh, wife of the famous Charles Lindbergh, is the narrator of this novel about their life in the 1920s and 1930s.

Beryl Markham grew up in British Kenya in the early 20th century. This novel tells the story of her unconventional childhood, her life in Kenya, her feats in aviation, and more.

Lola Woodby and her cook, Berta, track down a reel of film to earn some rent money in this funny, frothy new mystery series.

In 1922, a Bolshevik tribunal sentenced Count Alexander Rostov to live at the Metropol Hotel under house arrest. Based on a true story, the novel tells of the Count's life at the hotel over the next few decades. A beautifully written, uplifting novel.