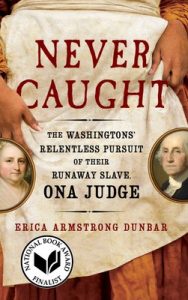 In traditional biographies of the Washingtons, the subject of slavery rarely comes up, or, if it does, it is given a paragraph or perhaps a chapter to explain the “peculiar institution” as it related to the first First Family. There is nothing like a personal story—an enslaved person's personal and true story—to get a deeper perspective. In Erica Armstrong Dunbar’s Never Caught: The Washingtons’ Relentless Pursuit of Their Runaway Slave Ona Judge, that is exactly what we have.

Ona Judge was the daughter of an English indentured servant and an enslaved woman of African ancestry. Both parents worked for the Washingtons, and, by the laws of the day, Ona Judge was enslaved like her mother. Having spent six years with the first president’s household in the nation’s capital (then Philadelphia), she had enjoyed certain freedoms among the free black people of Pennsylvania and did not wish to be uprooted, removed back to Virginia, and have her ownership transferred to Washington’s fiery-tempered step-granddaughter, which is what the Washingtons wanted.

So, on Saturday, May 21, 1796, at the age of 22, Ona slipped away from the Washingtons’ Philadelphia mansion, never intending to return. She would spend the rest of her life in danger of being kidnapped and returned to her owners. But she persevered, marrying and raising children in freedom if not luxury. Near the end of her life in the 1840s, she decided to tell her story to newspaper reporters, and it was snapped up by abolitionist groups as well.

Author Erica Armstrong Dunbar is an excellent researcher and storyteller who manages to blend what is known of Ona’s days with some details that can only be conjectured to create a compelling personal history of one woman who persistently sought a freer life.