The Great Plains are the part of North America east of the Rocky Mountains and west of the Mississippi River. The American states that are part of this region are Colorado, Kansas, Montana, Nebraska, New Mexico, North Dakota, Oklahoma, South Dakota, Texas, and Wyoming. The land there is flat and includes prairie, steppe, and grassland. 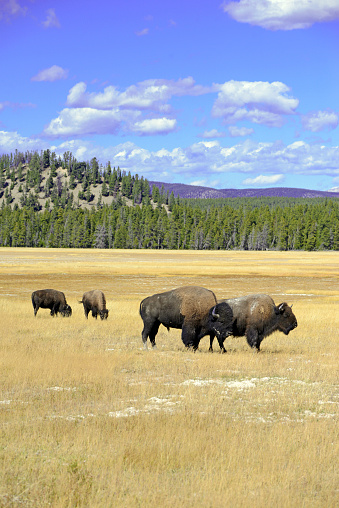 Who Are the Plains Indians?

There were many differently-named tribes who lived on the Great Plains when the Europeans came, but they mostly shared a common culture because of living in similar environments. The buffalo (bison) was a major source of food along with other game and cultivated crops. They also gathered wild fruits and vegetables. Nomadic (roaming) tribes lived in large teepees, often painted with religious symbols. Tribes that did not roam often lived in earthen or grass lodges and would grow crops.

Before the Spaniards came, Plains tribes would generally migrate by putting their possessions on a travois that was pulled by their dogs and head out to follow the game. After the Europeans re-introduced horses to the New World in the 1600s and traded them to the tribes, they used those instead. The tribes also used horses to help them hunt and make war. Some tribes, such as the Lakota, spoke the Sioux language and shared in that larger culture. The Cheyenne tribe was part of the Algonquian group--somewhat similar in language and customs to the Powhatan Indians in Virginia. The Comanche were part of a different language tradition altogether—the Uto-Aztecan, which included the language of the Aztecs. Unlike the Cheyenne, the Comanche were organized as smaller bands, not as one large nation. Some worked with the U.S. Army as scouts and some raided pioneer settlements.

Indeed, during the Westward Expansion in the 1800s, settlers and Plains tribes came into conflict often. It was a time of war. Many lives were lost, and the tribes were eventually restricted to reservations of land that did not mesh with their nomadic way of life. Some rebelled. More lives were lost. To this day, some descendants of the Plains tribes live on those reservations but others have chosen to live out in the wider world while still maintaining their connections to their tribes through organizations, such as the Cheyenne and Arapaho Tribes.

Below are some resources that can help you learn more about the tribes of the Great Plains:

Get online, teacher-friendly reference material on the Plains Indians. You will need a CRRL card to access these databases.

Map of the Plains Indians: Tracking the Buffalo
The shaded area on this map shows the territories occupied by various Plains Indian tribes during the middle of the 19th century. Can be printed.

Myths and Legends of the Great Plains by Katherine B. Judson
An older book filled with stories collected by the Bureau of American Ethnology, as told by the tribespeople themselves in the earliest part of the 20th century.

Smithsonian National Museum of the American Indian
With locations in DC and New York, this museum has to explore stations, especially-for-kids video showings, and many artifacts on display. Free admission.

Tracking the Buffalo: Stories from a Hide Painting
Buffalo played a major part in the daily lives of the Plains tribes, and they used nearly all parts, including painting on the hides. Those paintings tell stories about their lives. Explore the story on a buffalo hide, and make your own "buffalo hide" painting. Includes teaching materials.