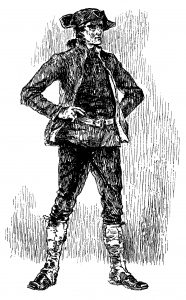 Major Michael Wallace, of the American Revolutionary Army, was an enormous man, more than six feet six inches tall, broad and powerful. He was a brother of General* Gustavus B. Wallace, and after he had fought through the war with distinction, he and the general, bachelors, returned to live at "Ellerslie," the family home, where their mother and father were still living.

"Major Mike" became a tradition, a legendary figure in the current annals of Stafford - a gigantic, immensely strong, good-natured but fearsome figure. No man, after a short time, dared to engage him in an altercation. His vast deep voice was so potent that, it is said, standing on the porch of Ellerslie, he could call a servant two miles away. When angered he roared like a wild bull and, when going through the woods, he sang to himself, the song echoed over the countryside.

In those days men met in physical contact on court days, or at assemblages, in a mere spirit of bravado; and Major Mike had not been long from the war when he was the admitted conqueror of all the Staffordians. One day there came to the Port of Falmouth a ship from England, commanded by a brawny, old-faced, flaming Irishman whose very heart's joy was a fight. Having about the taverns found one or two brawls in the taverns that ended, for him, in easy victories, he found no more of the hardy rough and terrible fighters of the day willing to fight him, and abandoned hope of further fray. Then someone thought of Major Michael Wallace, and, while the Irish fighter waited eagerly, a horseman rode to Ellerslie. Major Mike had no grudge against the sea captain, but, ever ready for any encounter, he readily ordered his horse saddled and rode to Falmouth. In the center of the street that is now U. S. Highway 1, a ring was formed. The Irish sea captain and Major Mike agreed to fight to the finish, no rules. [They] divested themselves of their coats, and the fray began.

The first blow from the fist of Major Mike killed the Irishman.

Somewhat sobered, Major Mike now refrained from battles - there was no one to fight him anyway - and continued his pursuits at Ellerslie. It was his custom, save in very cold weather, to sleep upon the bare floor. And there he always lay down when he wanted to rest. He was lying thus one day when a parson from somewhere "up the country" rode by and stopped. He was going, he said, to the home of the Widow Wishart,** widow of the well-known Parson Wishart. He had been chosen, he said, as one of those to settle the late Parson Wishart's estate, which was quite valuable. He recited that the widow was possessed of about 6000 acres of valuable land, a very fine brick house with many outbuildings and stables, fine carriages and riding horses, many cattle and sheep and oxen, and some sixty slaves. The giant Major Mike had arisen from his couch on the floor by now and asked the traveling stranger "And when are you going?" "I shall accept your hospitality tonight and remain here," answered the guest, "I ride at sunup tomorrow." "And I ride with you," declared Major Mike, "and I'll marry the widow!" which is exactly what he did. From that union came a large branch** of the Wallace family in Virginia, all of them big, powerful men.

*There are indications that Gustavus' highest rank was that of lieutenant colonel.
**Lettice Wishart, the widow of Reverend James Wishart of Lamb’s Creek Church.

This story was gathered as part of the W.P.A. folklore project and was reprinted in Virginia Folk Legends, edited by Thomas E. Barden, pp. 185-186.

Rokeby was a nearby home owned by the son of Major Mike and Lettice Wishart. This page from the National Register of Historic Places has some family history.