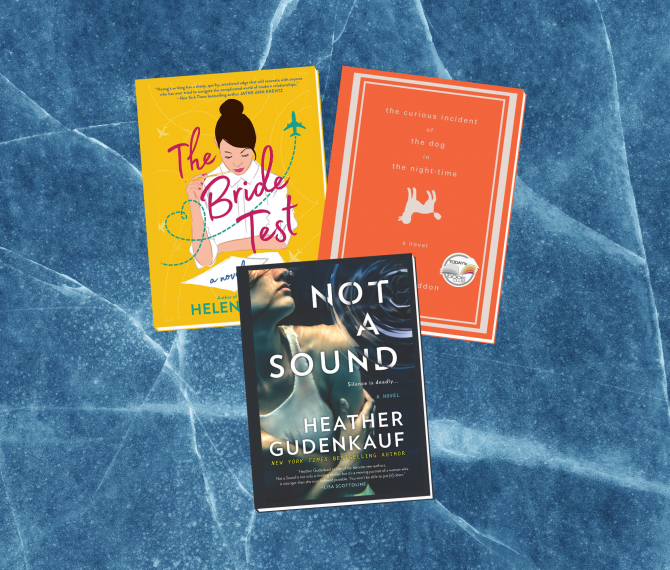 Although the weather outside can be frightful, folks at Central Rappahannock Regional Library know the best way to beat those winter blues is with a good story.

And I agree with them. As the Access Services Librarian, I help the members of our community who might have difficulties using the library resources due to diff-abilities and disabilities through a host of programs - programs that sometimes are the only way they have of getting library materials. Like those who need to read the descriptive captions on the movies playing at Salem or who need help hearing all the excellent musicians playing this winter at Howell’s Fireside Lounges. It even includes some of our most avid, longest readers at the library who, after decades of visiting us, sometimes need books brought to them now because it can be hard getting out of the house.

For these members of the Central Rappahannock Regional Library community, beating the winter blues with a good story is a really big deal and one that can sometimes feel a little lonely as we all curl up inside our own houses. So this year, as part of our Adult Winter Reading Challenge, I thought I’d help us all get to know each other a little bit better by inviting all of you readers out there  - whether you’re in one of the Access Services programs or not - to join me in reading some books from our collection that are from the point of view of someone who sees, hears, or takes in the world in a way you might not: someone whose story might open up a whole new perspective on life for you!

If you are inspired to join me in reading these titles and are participating in the Adult Winter Reading Challenge, you can count any of these books towards the challenge’s goal of reading at least four books this winter. And many of these books are also available as eBooks, audiobooks, or as large print books, for those of you who want the full experience.

CRRL Picks: 16 Stories from the Disabled

Looking for a different perspective on life? Check out these 16 stories (8 featured below) - many available not only as books, but as audiobooks, eBooks, CD, and large print books. They show how life can be amazing, challenging, and marvelous from the viewpoints of those with disabilities.

Marie Laure is a blind French girl who has learned to find her way in the nearby streets with a carved model of the neighborhood. When she and her father flee to live with her grandfather in Saint-Malo, her father carves the new city before vanishing. Meanwhile, Werner, a teen who works with Nazi radios, finds his way to Saint-Malo near the end of the war. Their intertwining stories leave the reader with a strong impression of living in France during the war as well as a knowledge of what it was like for real people caught up in terrifying circumstances.

Khai Diep, who has autism, has trouble expressing emotions and doesn't think he'll ever fall in love, so his mother decides to play matchmaker. She returns to Vietnam to search for a likely bride and meets Esme, a young single mother and domestic worker living with her mother, grandmother, and daughter. She's never even met her American father, but being of mixed race has always made her feel out of place. When Khai's mother suggests that Esme return to California with her to try to woo Khai, Esme embraces the plan as an opportunity to create a better life for her family. Sequel to Hoang's 2018 novel The Kiss Quotient.

Autistic 15-year-old Christopher Boone relaxes by groaning and doing math problems in his head, eats red - but not yellow or brown - foods, and screams when he is touched. Strange as he may seem, other people are far more of a conundrum to him. When his neighbor's poodle is killed and Christopher is falsely accused of the crime, he decides that he will take a page from Sherlock Holmes (one of his favorite characters) and track down the killer. As the mystery leads him to the secrets of his parents' broken marriage and then into an odyssey to find his place in the world, he must fall back on deductive logic to navigate the emotional complexities of a social world that remains a closed book to him.

Ginny Moon is mostly your average teenager - she plays flute in the high school band, has weekly basketball practice, and reads Robert Frost poems in English class. But Ginny is autistic. And so what's important to her might seem a bit... different: starting every day with exactly nine grapes for breakfast, Michael Jackson, her baby doll, and crafting a secret plan of escape. After being traumatically taken from her abusive birth mother and moved around to different homes, Ginny has finally found her "forever home" - a safe place with parents who will love and nurture her. This is exactly what all foster kids are hoping for, right? But Ginny has other plans. She'll steal and lie and exploit the good intentions of those who love her - anything it takes to get back what's missing in her life. She'll even try to get herself kidnapped.

Jacob Hunt is a teenager with Asperger's syndrome and a morbid fascination with forensic science. He can recite all the intricacies of fingerprint analysis and recall the episode and number of his favorite TV crime show, but he can't feel your pain or emotions. For emotional intelligence, Jacob has a tutor - until the tutor is found murdered. When Jacob is questioned, the same hallmark signs of his Asperger's that made him quirky also make him look very guilty - even to those who love him.

Escaping the 1527 sacking of Rome with just the clothes on their backs (and a few swallowed jewels in their bellies), courtesan Fiammetta Bianchini and her companion the dwarf Bucino seek refuge in Venice. Starved, stinking, her beauty destroyed, Fiammetta despairs - but through cunning, will, Bucino's indefatigable loyalty, and the magic of a mysterious blind healer called La Draga, she eventually recovers. Aided by a former adversary, who now needs her as much as she needs him, Fiammetta finds a wealthy patron to establish her in her familiar glory. Sequel to Durant's 2004 book, The Birth of Venus.

In 2005, Ellen Rogers' 22-year-old son Ned suffers spinal cord injury, major brain trauma, and organ damage in a car accident. Doctors didn't expect him to live, but Ellen refuses to give up, her stubborn resolve eventually turning into hope upon learning of Helping Hands: Monkey Helpers for the Disabled. After a year on the wait list - during which time Ned slowly regains his ability to speak and eat solid food despite severe nerve pain - Ned finally meets Kasey, a capuchin monkey who moves in for "Monkey Boot Camp." Kasey is a lively newcomer, upsetting the delicate hierarchy of the home, but Ned builds a bond with Kasey, and, with Kasey's help, Ned slowly begins to regain his confidence and some of his physical abilities.

Kevin Ross is a true American success story. Deaf from the age of 5, he has risen from a difficult childhood on the street to become the head of a lucrative cookie company. Suzy Keller is a model who is determined to land a coveted job as model and spokesperson when Kevin's cookie company launches. But when the two meet, Suzy can't believe her eyes - or the pace of her pulse in response - while Kevin forces to himself to keep his distance, feeling that his deafness would only get in the way. Suzy knows convincing Kevin to give her the job won't be hard, but how can she get him to let her into his heart? Kevin is about to find out.