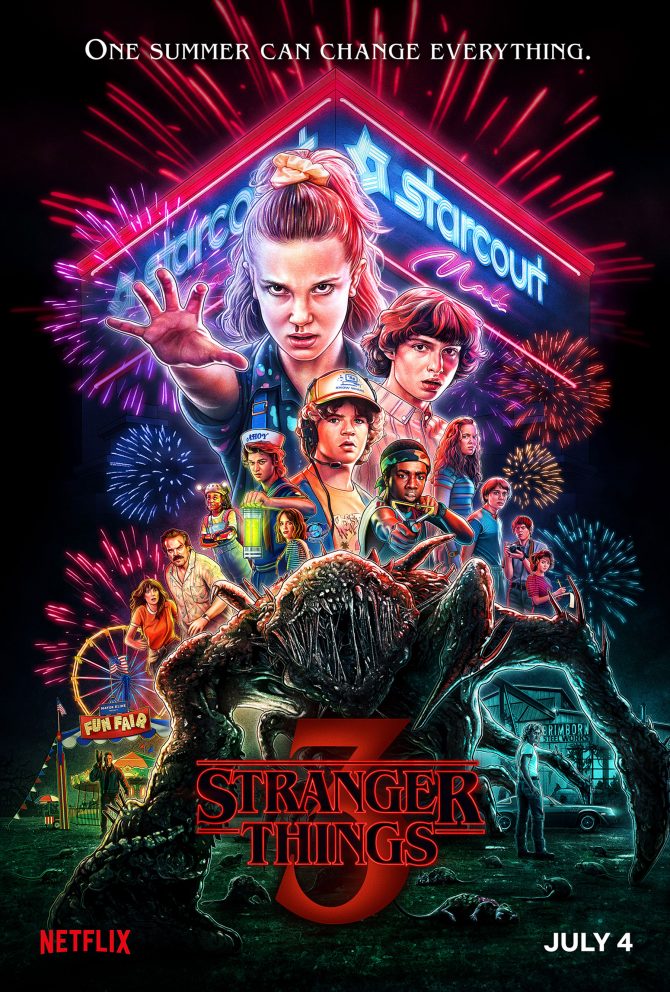 It's time to return to the tiny and disturbing town of Hawkins, Indiana, for the third season of Netflix's Stranger Things on July 4.

A quick refresher on the last time we saw our favorite Hawkins kids: Mike, Dustin, Lucas, and, of course, the powerful telekinetic Eleven discover that poor Will Byers is still being stalked by entities who abducted him in Season 1 from the alternate dimension a.k.a. the Upside Down. The Demogorgon monster isn't the biggest threat that's come out of Hawkins National Laboratory. Instead, it is the Mind Flayer also known as the Shadow Monster. A creature that would fit comfortably in H.P. Lovecraft's world, the Mind Flayer can control and command Upside Down entities through a hive mind - and through direct possession.

Now in Season 3, it's 1985, and summer is heating up. School is out, there's a brand new mall in town, the pool is open, and the Hawkins crew is quickly growing out of childhood. Despite the fun summer planned, they will soon be reminded that evil never ends - it evolves.

Can't wait for the next season? Check out the horror and suspense read-alikes below, and don't forget to tune in to Netflix on July 4 for the new season.

The Boys of Summer by Richard Cox
Just like Mike and his friends, the kids in Richard Cox's novel have a hard time growing up around supernatural happenings. After a massive tornado devasts the city of Witchita Falls, Texas, nine-year-old Todd Willis is in a coma, fighting for his life. Four years later in 1983, he awakes to a world that looks the same but feels different. It's a struggle to separate fact from fiction as Todd battles lingering hallucinations from his long sleep. With his new friends, he comes of age during a dark and fiery summer in which they all discover a secret so terrible they agree to never speak again. But, 25 years later, the darkness returns and the boys who are now men are forced to reunite and confront the darkness of that summer, once and for all.

Other books with strange coming-of-age themes: It, by Stephen King; Meddling Kids, by Edgar Cantero; Something Wicked This Way Comes, by Ray Bradbury; and Summer of Night, by Dan Simmons.

The Devil Crept In by Ania Ahlborn
Disappearances happened in Hawkins, especially mysterious ones like in this book by Ania Ahlborn. The disappearance of Jude Brighton is puzzling the small town of Deer Valley, Oregon, and the search for him is in full swing. Stevie Clark, Jude's cousin and best friend, knows that the first 48 hours of disappearances are the most important and that time has already passed. Then, there was that one boy, Max Larsen, the one who was found dead after also disappearing under strange circumstances. And, there are those animals . . . the ones that have gone missing out of yards. For years, the residents of Deer Valley have whispered about the unsolved crimes. Now, fear has been reborn, and, for Jude's sake, Stevie is determined to find out happened to his cousin - even if the truth is too horrifying to imagine.

Firestarter by Stephen King
You knew Stephen King would appear on this list more than once. In this case, it's for his novel Firestarter, in which Charlene "Charlie" McGee is an early version of Eleven. Andy, Charlie's father, participated in a government agency ("The Shop") experimental drug trials, along with his wife, Victoria. They both developed supernatural abilities, such as telekinesis, auto-hypnotic mind domination, and telepathy. But their daughter Charlie develops a frightening pyrokinetic ability that is the most powerful The Shop has ever seen. After a botched kidnapping operation by The Shop leaves Victoria dead, Andy and Charlie find themselves on the run as Charlie's powers continue to grow stronger.

Other books involving strange experiments or powers: Watchers, by Dean Koontz; The Power, by Naomi Alderman; and Fury, by John Farris.

My Best Friend's Exorcism by Grady Hendrix
Will Byers experienced possession by the Mind Flayer in the second season of Stranger Things, much like Gretchen in this horrifying book by Grady Hendrix. It's 1988 in Charleston, South Carolina. High school sophomores and best friends Abby and Gretchen spend most of their time listening to music and sneaking smokes and Bud Light. After a night of acid-dropping and skinny-dipping turns horrible, Gretchen begins acting very differently. Her mood swings are constant, she refuses to shower or change her clothes, and she randomly starts . . . bleeding. As things begin to escalate, Abby realizes she's the only one who may be able to save her friend from the Devil himself.

Other books involving strange possessions: The Exorcist, by William Peter Blatty; A Head Full of Ghosts, by Paul Tremblay; and In the Dark of the Night, by John Saul.

The Stranger Things universe also has its own books, involving characters' stories that have not been expanded upon the Netflix series.

Stranger Things: Suspicious Minds by Gwenda Bond
The truth behind Eleven's mother Terry is revealed in the summer of 1969 when she signs on as a test subject for a government experiment, code-named MKULTRA.  But behind the walls of Hawkins National Laboratory - and the piercing gaze of its director, Dr. Martin Brenner - lurks a conspiracy greater than Terry could have ever imagined.

Stranger Things: Darkness on the Edge of Town by Adam Christopher
Explore the past of Officer Jim Hopper during his time as an NYPD detective in the late 1970s, when he investigates a string of mysterious murders in which the victims were ritually disfigured and has ties to government-funded ESP experiments, the Vietnam War, and Satanic cults.

Bonus: Check out the Dungeons & Dragons handbooks we have. You know you want to play after watching Stranger Things.