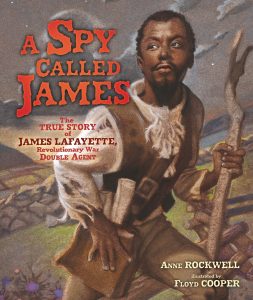 James was an enslaved African in Virginia when the American Revolution began. Wanting to earn his freedom while helping the new country, he volunteered for the Revolutionary Army, with the promise of his freedom at the war’s end—if the Americans were victorious.

He was assigned to work for the young and brilliant French commander who was helping George Washington, the Marquis de Lafayette. Lafayette had a special job for James. He wanted him to become a spy. James agreed and appeared at a British camp in tattered clothes, asking for work. The British, discovering how clever James was, asked him to spy for them!

James said yes. Soon, he was passing good information to the Americans and returning to the British with deliberately false information about what the Americans were going to do. It has been said that America owed a part of its victory to James. In the author’s note at the end, you will learn what happened to James after the war.

Floyd Cooper works his magic with yet another picture book celebrating African American history and culture. His illustrations for A Spy Called James: The True Story of James Lafayette, Revolutionary War Double Agent, by Anne Rockwell, bring the lesser-known piece of history vividly to life. Children’s author Anne Rockwell tells this story with enough history to make it meaningful in a classroom setting while still weaving a tale elementary school students should sit still for.

Other books that might work well with this one include Floyd Cooper’s Coming Home: From the Life of Langston Hughes and America's Black Founders: Revolutionary Heroes and Early Leaders with 21 Activities, by Nancy I. Sanders.