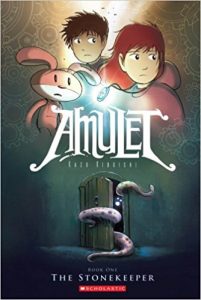 Emily and Navin have just moved into their grandfather's abandoned house with their mother. Their grandfather has been missing for decades, so Emily doesn't think twice about picking up the necklace she finds in his library. What she has awakened though, is a gateway to a bizarre and magical world. Suddenly her mother is swallowed whole by a hideous tentacled creature and it's up to Emily and Navin to get her back. So begins the first book in the Amulet series, The Stonekeeper.

It turns out that the necklace is a powerful amulet that can control and protect any surrounding life force. Emily's grandfather's last wish was for her to take up the stone and help save this strange world, known as Alledia, from an evil elf king. Emily also receives several robots that her grandfather single-handedly constructed to help her with this mission. The first robot we meet is the pink rabbit, Miskit, who wields a stun gun while piloting a giant mechanical exoskeleton.

Kibuishi has done his homework when it comes to myths and fantasy quest stories. Older readers might recognize moments that match the Lord of the Rings or the Star Wars films. When I met the fox bounty hunter Leon Redbeard in the second volume of the series, I was immediately reminded of Strider from J.R.R. Tolkien's stories. There are rugged heroes, mysterious prophecies, and many examples of bravery and friendship throughout the three books. It also successfully keeps its characters from falling into stereotypes. Few in this adventure are completely evil, and everyone offers understandable motives for their actions.

The most important detail of the book is that it's a well-done example of a swashbuckling fantasy adventure, which can be hard to find. Fans of the graphic novel series Bone, by Jeff Smith, will immediately feel at home in Alledia.