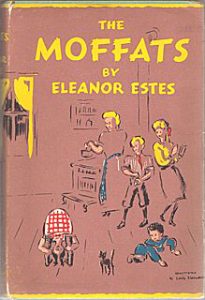 Eleanor Ruth Rosenfeld (Estes) loved to tell stories to children. She began by working as a children's assistant in her hometown library, but when she became sick with tuberculosis, she spent the quiet days of her recovery writing down her childhood memories as a series of stories for young readers.

In The Moffats, a terrific family, growing up during tough times in Cranbury, Connecticut in the 1910s, face calamity when the landlord puts a "For Sale" sign on their beloved yellow house. Janey's widowed mother works as a seamstress every day to put food on the table, coal in the grate, and clothes on their backs, but there isn't enough money left to buy a home. Week after week, month after month, the kids - fifteen-year-old Sylvie, twelve-year-old Joey, nine-year-old Janey, and five-year-old Rufus - expect the worst: that someone will buy their house, and then what will happen?

Janey, a perceptive middle child as the Eleanor was, knows changes are coming: not only this big move to somewhere unknown, but she can also see her brothers and sister growing up. Her older sister doesn't want to play running games with the kids anymore, and Janey worries and wonders when this will happen to her. Over a year of hard times and good, things do change. Janey makes her first best friend, and the family's story continues in Newbery-Honor book The Middle Moffat and Rufus M.

The author returned to the splendid, child-friendly setting of Cranbury, a town based on her own West Haven, Connecticut childhood home, for a book about another family. The Pyes have a bit more money and a father who has an exciting job as an ornithologist (bird scientist) for the government. For them, a year is spent with loving family members working and playing together. They discover Judges Cave, the trolley lines, the skeleton houses, and fantastic meteors in the old brick lot nearby.

Jerry and Rachel enjoy the year surrounded by their parents, grandparents, the bright toddler Uncle Benny, and the ever-aloof Gracie the Cat. For a dollar earned with fun and hard work, they buy Ginger Pye, a smart, sweet terrier puppy, who fast becomes an important part of the Pye family. But on Thanksgiving, Ginger disappears. The kids were careful to lock the gate, so someone must have stolen him! The only clue is a mysterious stranger in a mustard yellow hat who was glimpsed leaving the scene of the crime.

Ginger Pye won the Newbery Medal in 1952. The book is still popular today with kids because, for all the innocent joy of its story, the author never talked down to her audience. Young students are gripped by the mystery, and, through Eleanor's evocative writing, they, too, can own Ginger and worry when she is taken. Like Beverly Cleary, author of the Ramona books, Eleanor had an understanding of what's important to children when dealing with the funny and disastrous bits of everyday living. In the sequel Pinky Pye, the family finds a small, oddly gifted black kitten on their vacation to Fire Island.

In between The Moffats and Ginger Pye, Eleanor wrote a short novel entitled The Hundred Dresses. Unlike her series books, The Hundred Dresses focuses more on the problems and pain of childhood. Maddie's best friend Peggy comes from a rather rich family. Peggy and her other friends' most enjoyable past time is to make fun of a poor girl from an immigrant family. Maddie doesn't want to join in to make Wanda Petrowski's life as miserable as possible, but she's afraid she might be friendless if she doesn't go along. When Wanda, who wears the same faded blue dress to school every day, brags that she has a hundred dresses of silk and velvet in her closet, the nasty catcalls really begin. In this somberly clever book, Estes shines a light into the dark side of children's minds, managing to convey wicked realities in a tight, neat volume which was a Newbery Honor Book in 1945.

Eleanor Estes and her husband Rice--who was also a librarian--moved around the country a lot during those productive years with their only daughter, Helena. Helena would become a major inspiration for two of her children's books, The Witch Family, a fantasy, and the picture book, A Little Oven. Several of her later short works from the 1970s, The Coat-Hanger Christmas Tree and The Lost Umbrella of Kim Chu, explore children's persevering spirits in the face of dysfunctional families.

In 1962, Eleanor Estes received the Certificate of Award for Outstanding Contribution to Children's Literature and was nominated for the Laura Ingalls Wilder Award in 1970. Ginger Pye earned the Herald Tribune Spring Book Festival Award in 1951. The Middle Moffat (1943) and Rufus M. (1944) were also Newbery Honor books.