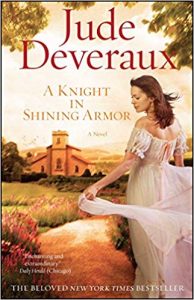 Dougless Montgomery tried to be the ultimate American woman - but somehow she always ended up the victim of family jokes. On what was supposed to be a romantic vacation for herself and her lover, Dougless finds instead disappointment, heartbreak, and abandonment. What she needed now was a knight in shining armor.

A Knight in Shining Armor

If you want another love story involving brave knights and damsels, check out these romantic suggestions.

The story of young Ida de Tosney, mistress to King Henry II, and Roger Bigod, the lord she chose to marry.

Marigold scorns the king's edict and vows she will never marry a lowly earl, so Lord Vincent must call his beloved Megan from the abbey and send her to marry Bracken of Hawkings Crest. Soon jealousy drives Marigold to madness when she discovers that Bracken has been made a duke for his obedience. Will Megan be rescued from Marigold's wicked scheme?

When Lady Olivia's castle is besieged, she and her sister are taken captive and held for ransom by her father's enemy, Lord Pitt. Loyalty to family means everything to Olivia. She'll save her sister at any cost and do whatever her father asks - even if that means obeying his order to steal a sacred relic from her captor. As Lord Pitt's commander, handsome Sir Aldric is in charge of the beautiful but feisty new prisoner. He has his hands full attempting to keep Lady Olivia out of trouble - and his heart.

It is a dark time for Rowena Belleme. The striking and spirited lady must produce an heir, for failure to do so will incur the dangerous wrath of a ruthless stepbrother who stands to forfeit his ill-gotten wealth. But in all of England, there is only one man whom Rowena would have sire her child. His name is Warrick deChaville, a magnificent knight who possesses the strength, intelligence, and courage - as well as the extraordinary good looks - that Rowena would have passed on to her son.

When 13th-century knight Garron of Kersey returns home from the king's service to claim his title as Baron Wareham, he's shocked to find Wareham Castle very nearly destroyed by a man called the Black Demon. Together with the enigmatic Merry, the bastard child of the castle's priest, Garron brings Wareham back to its former splendor - and hunts for the Black Demon who sought his brother's cache of gold.

View more suggestions for A Knight in Shining Armor.