After by Anna Todd: Tessa has direction, ambition, and has barely moved in her freshmen college dorm when she meets Hardin. With his cocky British accent and tattoos, he's much different 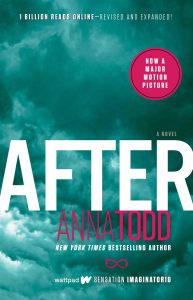 from what she's used to. But he's also rude to the point of cruelty. In fact, Tessa should hate him - and she does until she finds herself alone with him. She discovers a passion she's never known before. One minute he's infatuated with her, and the next he says he isn't the one for her. As she digs deeper into the real Hardin, she tries to push back, but he only pulls her in deeper. Why is she holding onto someone who's has a prejudice about nice girls like her? Unless . . . she's actually in love.

After is a 2019 upcoming romantic drama film directed The film stars Josephine Langford as Tessa Young, a college student who begins a turbulent relationship with a "bad boy" going by the name of Hardin Scott, played by Hero Fiennes-Tiffin. It will be released on April 12, 2019, by Aviron Pictures.

If you want another electrically charged romance, check out these suggestions.

View more suggestions for After