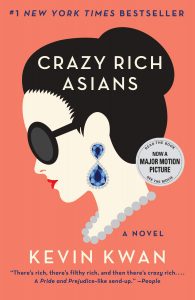 Envisioning a summer vacation in the humble Singapore home of a boy she hopes to marry, Chinese American Rachel Chu is unexpectedly introduced to a rich and scheming clan that strongly opposes their son's relationship with an American girl.

Crazy Rich Asians is an upcoming American romantic comedy-drama due out on August 15, 2018. Produced by Nina Jacobson and Brad Simpson of Color Force, it is directed by Jon M. Chu. The film stars Constance Wu, Henry Golding, Gemma Chan, Awkwafina, Lisa Lu, Ken Jeong, and Michelle Yeoh. It is the first film by a major Hollywood studio in 25 years to feature Asians in leading roles since 1993's The Joy Luck Club.

These suggested titles have similar themes to Kwan's bestseller, including the culture of Asians and Asian-Americans and, well, crazy rich individuals with a dash of love story.