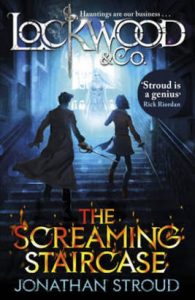 Follows three young operatives of a Psychic Detection Agency as they battle an epidemic of ghosts in London.

These young adult titles reflect paranormal investigation and other adventures like Lockwood & Co, relaying brave tales of the good vs. ghostly evil.

Tom Ward and his apprentice Jenny fight against boggarts, witches, and terrifying creatures of the dark. Together with the witch assassin, Grimalkin, they lead an army into battle against a dangerous enemy - but it all goes catastrophically wrong. The situation seems hopeless until Alice, Tom’s lost love and a powerful witch appears. But Alice had turned to the dark - can Tom trust her now?

When Phantoms - beasts made from nightmares and darkness - suddenly appeared, four girls, the Effigies, each gained a unique power to control one of the classical elements: earth, air, fire, and water. Now, with technologies in place to protect the world's major cities from Phantom attacks, the Effigies have become international celebrities, their feats televised and talked about in online fandoms. When Maia unexpectedly becomes the Fire Effigy, and an army of Phantoms prepare for an attack, there isn't much time for the Effigies to learn how to work together before the world is destroyed forever.

Newly arrived in 1892 New England, Abigail Rook becomes assistant to R.F. Jackaby, an investigator of the unexplained with the ability to see supernatural beings, and she helps him delve into a case of serial murder which, Jackaby is convinced, is due to a nonhuman creature.

In 1888, twelve-year-old Will Henry chronicles his apprenticeship with Dr. Warthrop, a scientist who hunts and studies real-life monsters, as they discover and attempt to destroy a pod of Anthropophagi.

Necromancers such as Odessa are beloved for their ability to reunite the living with dead loved ones, but the emergence of a powerful Shade (one of the undead turned feral and bloodthirsty) changes that. As more Shades manifest, necromancers are blamed, and it's up to Odessa to determine who is responsible.