Nancy Drew: The Palace of Wisdom by Kelly Thompson 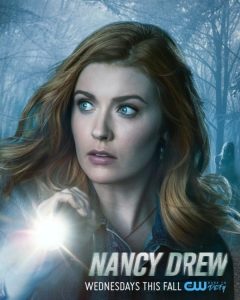 Nancy Drew is seventeen and good at everything, especially solving crimes. But her totally-in-control-and-obviously-running-perfectly-smooth-(but-not-really) life hits a snag when a mysterious message drags her back to the hometown she left behind. There she'll have to find out which of her friends are still her friends, which are enemies, and who exactly is trying to kill her...and (hopefully) stop them before they succeed.

The original series by author Carolyn Keene is available under children's fiction. The above is a Nancy Drew-inspired graphic novel, which has more ties to the new CW show that airs Wednesday, October 9, after the fourth season of Riverdale premieres. In the new show, according to IMDB, "Nancy Drew makes plans to leave her hometown for college after high school graduation but finds herself drawn into a supernatural murder mystery."

If you're looking for another fast-paced high school mystery, check out these suggestions.

Four teens who met on an online cold-case solving forum attempt to solve another teen's murder.

Years after Sunnybrook High lost five cheerleaders to sudden tragedies, Monica - whos sister was the last to die - begins unearthing her town's buried secrets. There are no more cheerleaders in Sunnybrook, but that doesn't mean anyone else is safe.

Sixteen-year-old Marigold "Goldie" Vance lives at a Florida resort with her dad, while her mom, who divorced her dad years ago, works as a live mermaid at a club downtown. Goldie has an insatiable curiosity, which explains her dream to one day become the hotel's in-house detective. When Charles, the current detective, encounters a case he can't crack, he agrees to mentor Goldie in exchange for her help solving the mystery.

When Kacey moves in with her estranged father and his new family, her new friend goes missing and Kacey finds herself at the center of the investigation.

While true-crime aficionado Ellery and her twin brother are staying with their grandmother in a Vermont community known for murder, a new friend goes missing and Ellery may be next.