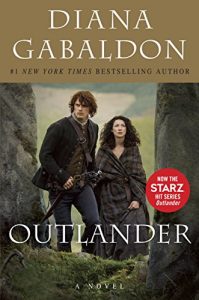 Hurtled back through time more than two hundred years to Scotland in 1743, Claire Randall finds herself caught in the midst of an unfamiliar world torn apart by violence, pestilence, and revolution and haunted by her growing feelings for James Fraser, a young soldier.

Outlander premiered on Starz August 9, 2014. It stars Caitriona Balfe as Claire Randall, a married World War II nurse who in 1945 finds herself transported back to the Scotland of 1743, where she encounters the dashing Highland warrior Jamie Fraser (Sam Heughan) and becomes embroiled in the Jacobite risings. Season 4 premieres November 4, 2018.

If you want another romance novel that expands across time, check out these suggestions.

Tom Hazard has a dangerous secret. Tom has lived history - performing with Shakespeare, exploring the high seas with Captain Cook, and sharing cocktails with Fitzgerald. Now, he just wants an ordinary life. So Tom moves back his to London, his old home, to become a high school history teacher. Better yet, a captivating French teacher at his school seems fascinated by him. But the Albatross Society, the secretive group which protects people like Tom, has one rule: Never fall in love.

Faye Barlow is drowning. After the death of her beloved husband, Will, she cannot escape her grief and most days can barely get out of bed. But when she's offered a job photographing South Carolina's storied coast, she accepts. In the quaint beach town, Faye falls in love again when she sees the crumbling yet beautiful Bride Island lighthouse and becomes obsessed with the legend surrounding The Lady of the Light - the keeper's daughter who died in a mysterious drowning in 1921. While visiting it one night, she is struck by a rogue wave and a force impossible to resist drags Faye into the past - and into a love story that is not her own. Can she love two men separated by a lifetime?

America is in the grip of a deadly flu pandemic. When Frank catches the virus, his girlfriend Polly will do whatever it takes to save him, even if it means risking everything. She agrees to a radical plan - time travel has been invented in the future to thwart the virus. If she signs up for a one-way-trip into the future to work as a bonded laborer, the company will pay for the life-saving treatment Frank needs.

Matheson's classic novel tells the moving, romantic story of a modern man whose love for a woman he has never met draws him back in time to a luxury hotel in San Diego in 1896, where he finds his soul mate in the form of a celebrated actress of the previous century.