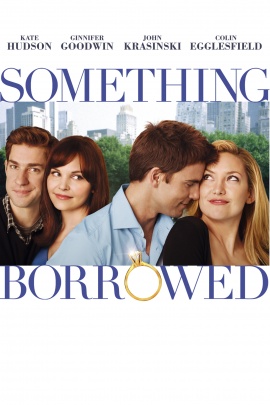 Rachel White is the consummate good girl. A hard-working attorney at a large Manhattan law firm and a diligent maid of honor to her charmed best friend Darcy, Rachel has always played by all the rules. Since grade school, she has watched Darcy shine, quietly accepting the sidekick role in their lopsided friendship. But that suddenly changes the night of her thirtieth birthday when Rachel finally confesses her feelings to Darcy's fiance and is both horrified and thrilled to discover that he feels the same way. As the wedding date draws near, events spiral out of control, and Rachel knows she must make a choice between her heart and conscience. In so doing, she discovers that the lines between right and wrong can be blurry, endings aren't always neat, and sometimes you have to risk everything to be true to yourself.

Something Borrowed is a 2011 American romantic comedy film based on Emily Giffin's book of the same name, directed by Luke Greenfield, starring Ginnifer Goodwin, Kate Hudson, Colin Egglesfield, and John Krasinski and was distributed by Warner Bros.

If you're looking for some major "chick lit" or books with strong, sometimes-single ladies, these titles are for you.

Meet Eleanor Oliphant: she struggles with appropriate social skills and tends to say exactly what she's thinking. That, combined with her unusual appearance (scarred cheek, tendency to wear the same clothes year in, year out), means that Eleanor has become a creature of habit (to say the least) and a bit of a loner. Nothing is missing in her carefully timetabled life of avoiding social interactions, where weekends are punctuated by frozen pizza, vodka, and phone chats with Mummy. But everything changes when Eleanor meets Raymond, the bumbling and deeply unhygienic IT guy from her office.

Eight years ago, Emma Montague left behind the strict confines - and rather dull boyfriend -of her upper-crust English life and moved to New York City, where she immediately found success in finance. But her soulless, cutthroat, all-consuming job was another life she didn't want. Emma will realize that the seeds of happiness must be nurtured and cherished to grow into something strong enough to shelter all their hopes and dreams.

Rebecca Rothstein-Rabinowitz is a plump, sexy chef who has a wonderful husband, supportive friends, a restaurant that's received citywide acclaim, a beautiful baby girl . . . and the mother-in-law from hell.

A collection of ten stories is filled with unwelcome house guests, disastrous birthday parties, needy but loyal friends, betrayal, jealousy, and flirtatious older men, and takes readers on a guided tour of the human heart.

After being let go from her competitive, high-pressure Seattle law firm, Libby Morgan reaches out to old friends and spends her afternoons at A Good Yarn, the local knitting store, where she forms close bonds with three women and finds time for romance with a charming and handsome doctor who seems to be her perfect match. But just as everything is coming together, Libby must make a choice that could forever change the life she holds so dear.

View more suggestions for Something Borrowed.