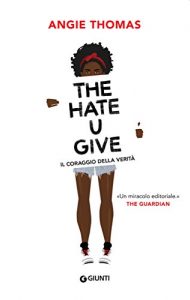 After witnessing her friend's death at the hands of a police officer, Starr Carter's life is complicated when the police and a local drug lord try to intimidate her in an effort to learn what happened the night Kahlil died.

The Hate U Give

If you want another powerful ripped-from-the-headlines title like Angie Thomas' bestseller, check out these suggestions for both tweens and teens.

View more suggestings for The Hate U Give.