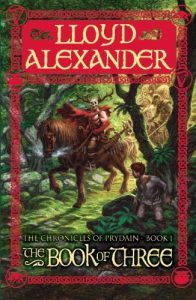 In The Book of Three by Lloyd Alexander, Taran feels that nothing exciting happens in his life and that nothing ever will.  And yet, Taran longs to be a hero, like his idol Prince Gwydion, the famed warrior who fights in the name of the High King of Prydain.  Taran lives on a farm called Caer Dallben, named after the ancient enchanter who dwells there. Dallben, between reading from his mysterious tome, The Book of Three, and giving Taran wise but confusing advice, spends most of his time meditating--an endeavor that he often undertakes lying down with his eyes closed while snoring.  The only other person on the farm is Coll, who instructs Taran in making horseshoes, despite there not being any horses.

Taran also helps care for a pig named Hen Wen, who can tell the future if one knows how to ask. This earns Taran the title Assistant Pig-Keeper, a far cry from Prince or High King. But one day, something upsets the animals on the farm, and Hen Wen escapes. Taran goes after her, running into the forest and getting lost. While moving aimlessly in the hope of finding Hen Wen, he spots the Horned King - the vicious, inhuman war leader of Arawn, Dark Lord of Annuvin. Taran runs away and is saved by a stranger who turns out to be Prince Gwydion himself, who has come seeking Hen Wen’s prophetic advice. Together, Taran and Gwydion set out to find the pig, thrusting Taran into many battles and unexpected places. He finally gets the adventure he’s been longing for, but it’s not at all how he imagined it would be.

One of the best parts of the book is the cast of characters. Along the way, Taran is joined by the strange creature Gurgi, who speaks in simple sentences and rhymes that mostly revolve around food; Eilonwy, a fiery girl with red-gold hair and a mysterious bauble that lights up at her command; Fflewddur Fflam, a minor king who grew bored with his kingdom and decided to become a bard, but is cursed with a harp that snaps its strings every time he tells a lie - about every minute or so; and Doli of the Fair Folk, a dwarf who seems always angry at everyone and everything—but especially at the fact that he can’t turn invisible.

The Book of Three is full of fantastical world-building, influenced heavily by Welsh mythology, which might be a bit too complex for very young children, but the story is fast-paced and explains important aspects of the world and characters along the way without feeling too heavy-handed. The story draws you in quickly and takes you off for a ride across the mythical land of Prydain. Like The Lord of the Rings, it takes place in a time long ago and in a land full of magic, but the writing is lighter and has a similar feeling to the Harry Potter books in that it focuses on Taran’s journey and how he grows up through his adventures. The Book of Three is the first in a series of five books by Lloyd Alexander, so when the ending leaves you wanting to explore more of this world there is plenty waiting for you. For those who love fantasy and adventure--young and old, The Book of Three has just the right kind of magic.

Watch the trailer for Disney’s The Black Cauldron, loosely based on the first two books from Lloyd Alexander’s Chronicles of Prydain: