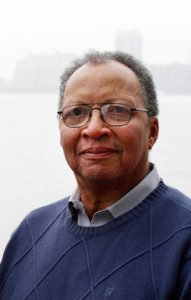 In his autobiographical novel for young people, Bad Boy, Walter Dean Myers wrote of a world - 1940s Harlem - that was markedly different from that of today. Most families were tightly-knit as was the community itself. Even so, it wasn’t a perfect place.  As he grew up his family struggled to get by, and, as he became a teenager, he became more aware of racism and how it could affect his future.

But during his early years, he didn’t think too much about race. He had friends who were white and black and the woman he thought of as his mother was of German and Native American ancestry. The man who raised him, though not his biological father, was African American.  Herbert and Florence Dean took Walter and his half-sisters to be fostered when they needed a loving and caring home.

His first years at school were difficult. Walter loved to read at home to his foster mother, who also read to him, but in the very early grades, his teachers required students to read out loud in front of the class. He dreaded this because he had difficulty pronouncing the words. In his mind, as he said them, they sounded fine, but few other people could understand him. When the other students laughed, he became very angry. He got into fights. He even fought with his teachers, getting into a lot of trouble. But one teacher who caught him reading silently in class at a non-reading time did something unusual. She gave him a frosty look - and a better book to read.

Soon he had a secret reading life. Guys in his neighborhood were supposed to be interested in sports--not books--so he played a lot of basketball and hid the books. Eventually, his teachers realized he was very good at reading - and writing. He was eventually allowed to go to Stuyvesant High School, where his gifts were encouraged.  Along the way, he got help with his speech problems, too.

But he didn’t stay out of trouble, and his family was still poor - too poor for him to go to college.  He dropped out of high school and did a stint in the Army. After he got out of the service, he eventually started working in the publishing industry, following advice from a teacher who told him that whatever else he did in life, he should keep writing.

Through the years, Walter Dean Myers has written dozens of books for children and young adults. A lot of them focus on the real-world problems that face inner-city kids: gangs, drugs, teen pregnancy, and just the hopelessness experienced by many who feel trapped by their surroundings. These books are not just award-winners; they are popular with the kids who are looking for books that reflect the harsh realities of their lives while still offering hope.

In addition to his books that reflect urban passages, he has written in many other areas, including fairy tales, picture books, and history. At Her Majesty’s Request: An African Princess in Victorian England tells the true story of a young girl rescued from slavers by an English sea captain who grew up in London’s high society. Looking for the Easy Life is a picture book fable of five monkeys who learn that "easy ain't always good" and "a little work ain't always bad."

In January 2012, Myers replaced Katherine Paterson as the Library of Congress's National Ambassador for Young People's Literature, a two-year position created to raise national awareness of the importance of lifelong literacy and education. He died on July 1, 2014 in Manhattan.

Read Books by Walter Dean Myers in the library

If Harlem high school senior Drew Lawson is going to realize his dream of playing college, then professional, basketball, he will have to improve at being coached and being a team player, especially after a new white student threatens to take the scouts' attention away from him.Game

Learning About Walter Dean Myers
http://comminfo.rutgers.edu/professional-development/childlit/myers.html
Has some biography, a bibliography and summaries of his works.

To Do Well in Life, You Have to ‘Read Well’
http://www.npr.org/2012/01/10/144944598/to-do-well-in-life-you-have-to-read-well
In this short interview, NPR’s David Greene discusses the importance of reading in today’s world with Walter Dean Myers.

A Video Interview with Walter Dean Myers
http://www.readingrockets.org/books/interviews/myersw/
You can either watch the video or read its transcript. Includes a short biography.

Walter Dean Myers
http://www.walterdeanmyers.net/
The author’s own Web site has a short and interesting autobiography, photos, reviews of his works, and contact information.

These articles are part of our online research collection. You will need a CRRL card to access these. Only a few of the many articles available in these databases are listed below:

From Biography in Context