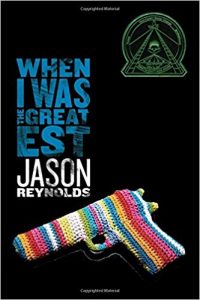 When I Was the Greatest is Jason Reynolds' first novel, but his voice is already fully-formed. He guides us through the life of Ali, a teenager living in Brooklyn, the non-Cosby part. Ali's mom complains about white gentrification raising the price of rent, but Ali does not fully follow.

I don't really get that. I mean, if I'm in a restaurant, and I order some food, and a white person walks in, all of a sudden I have to pay more for my meal? Makes no sense, but that's what she says.

Ali might not fully understand, but he has a good head on his shoulders. The same can't be said for his best friend Noodles, who is always trying to act his toughest despite the negative consequences that come with such a performance.

Then there is Noodles' older brother Needles, who gets his nickname from the knitting needles he carries around. Knitting helps Needles with his Tourette's syndrome, which typically has him shouting and spasming. It allows him to focus, keeping him somewhat quiet. Most everyone treats Needles respectfully because of his syndrome. Everyone but Noodles.. and Ali is tired of the unnecessary insults and abuse. When Ali and Noodles get the chance to go to a hot party with lots of older people from the neighborhood, they leap at the opportunity. There's only one catch. They must bring Needles along.

Ali thinks it could be a good experience for everyone involved, so they pull out all the stops. They get new haircuts and sharp-looking clothes from Ali's sometimes-there father. Nothing is too fancy for this social event.

Everything seems perfect, but when a misunderstanding at the party leads to Needles getting beat up, the incident ruptures the friendship between all three boys. Ali is going to have to figure out how to make things right and how to forgive Noodles for not defending his brother. Ali's boxing coach Malloy and his parents help him learn from his mistakes and gain responsibility for his actions.

This is a powerful story about friendship and family, showing how they might not always be perfect but are still tremendously important in both good and bad times.

Jason Reynolds' first book, My Name is Jason. Mine Too, explores African American masculine identity through poetry and art. If When I Was the Greatest is any indication, Reynolds still has a lot more to discuss, and I can't wait to hear him.