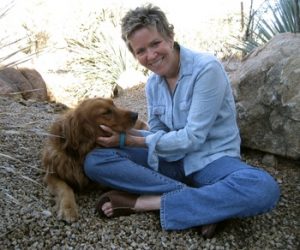 Barbara Tidwell was born in Mount Holly, New Jersey, on April 21, 1947. Mount Holly was a small town, surrounded by farms. Young Barbara was the class clown in elementary school. Whenever she thought of something funny, she would just blurt it out to share with everyone in the room. In fact, she got sent to the principal's office for talking too much. This was not a cool thing to have happen as her dad was then president of the school board! She also loved to read comic books. In high school and college, she studied to be a teacher. She thought she might be able to add some humor to dull science classes. Barbara never thought back then that she would be a writer.

But after college, Barbara married Richard Park. He was in the Air Force, and she stayed home to raise their two boys, Steven and David. Barbara did try teaching just a little bit, but she discovered she did not enjoy it. One day, her son brought home a funny book written by Judy Blume. Aha! Here, she realized, was a way she could share her humorous side with the world while still taking care of her kids at home.

She set herself a deadline of two years to finish her first book. Operation Dump the Chump is a sly look at the way a pair of brothers can drive each other and their parents crazy. This first manuscript was rejected three times, but it was finally bought, along with two other stories. Don't Make Me Smile, the story of a boy whose world crashes around him when his parents get divorced, was the first one in print.

Barbara Park is a very funny lady, but over the years she's written several books about serious topics. She likes the challenge: Mick Harte Was Here was a very difficult book to write. But of all my books, I like it the best." Mick Harte, as told by his sister Phoebe, is a painful and honest remembrance of Mick's very last day. Mick's story was inspired by an accident that happened to a child in Barbara's neighborhood. Unlike most of her books, this one really does have an important message for the reader to take to heart.

On the lighter side, Skinnybones features Alex, a funny, nerdy kid who wants to/has to play Little League. Of course, his team gets creamed. But it's a lot harder to take when the other team's star player is also the class bully. If you like Skinnybones, look for its sequel, Almost Starring Skinnybones. What's as bad as a bully who won't leave you alone? How about losing all your friends at once? Howard has to move to a new town. He realizes that he'll be the new kid there. For a long time, nobody will even bother to know his name. He'll just be The Kid in the Red Jacket.

In elementary school, there's just comedy waiting to happen. You take a fat kid, a brain, and a tattletale. Put them someplace they never expected to be (the principal's office), and let the punchlines roll. Maxie, Rosie, and Earl don't think they deserve their punishments, so they decide to do something about it. The trio's adventures continue in Rosie Swanson, Fourth Grade Geek for President and Dear God, Help! Love, Earl.

The most famous of Barbara's fictional kids is Junie B. Jones. This smart-mouthed kindergartener is the star of a long series of beginning chapter books for younger readers.

Who is Junie B. Jones?

Junie B. Jones is a girl who knows her own mind. Junie B. Jones does not like: Yucky Blucky Fruitcake or The Stupid, Smelly Bus. Junie B. Jones has some unusual personal qualities, to wit, Her Big, Fat Mouth and a less-than-perfect command of the English language. She is also fond of Sneaky, Peeky Spying. However, she is Not a Crook. Check out more Junie B. Jones books here!

Besides being great reads, many of Barbara Park's books have won important awards: 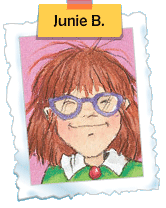 These days, Barbara and her husband live in Arizona, as they have for 30 years. She has a golden retriever named Maggie and likes taking hikes in the desert. In her spare time, she enjoys napping and eating frozen M & M's. One thing she definitely loves about her work: she can work in her pajamas if she wants.

You can read more about Barbara Parks online!

Junie B. Jones
http://www.randomhouse.com/kids/junieb/
Junie B.'s (and Barbara Park's) Web site has lots of fun things to do: coloring, puzzles, and a place to ask Barbara Park questions. About Barbara Park has answers to dozens of readers' questions. The Teachers' Corner has fun activities about Junie B. and her friends to use in the classroom.