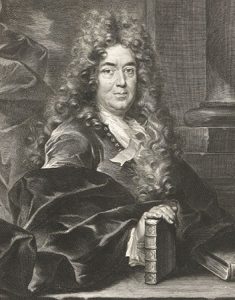 "As soon as he entered the wood all those great trees, and the interlaced brambles and thorns separated to let him pass. He walked towards the castle, which he could see at the end of a great avenue. He was surprised that none of his companions had been able to follow him since the trees had closed in again as soon as he had passed. But he did not falter. A young prince in love is always brave."

Sleeping Beauty. Cinderella. Puss in Boots. Little Red Riding Hood. These enduring stories were created as we know them by a brilliant man who lived in 17th-century France. Although similar, but simpler stories were gathered more directly by the folklorists Jacob and Wilhelm Grimm in the 19th century, it was Charles Perrault's addition of delicate and amusing words, crafted to entrance a noble audience, that caught fire with readers' imaginations and were the basis for the way these stories are remembered today. It is easy to see the difference between a story collected by Grimm and a tale sculpted by Perrault. A Grimm tale is simple and direct and sometimes alarming while Perrault's are laced with details that still fire modern imaginations.

So, who was the man who gave Cinderella her pumpkin coach and Sleeping Beauty her cursed spindle? Charles Perrault was one of many Parisians born into a bourgeoisie (middle class) family. His father, Pierre Perrault, was a parliamentary lawyer who desired that his sons get an education to prepare them for taking their place in his world. Scholarly education in the 17th century was far, far stricter than what is found in modern classrooms and very different in what was learned. For one thing, students were expected to read, write, and speak Latin at extremely young ages. The classic books (coming from Greece and Rome's ancient periods) were a large part of the curriculum. But Charles did not mind. On the contrary, in his autobiography, he remembered, "My father took the trouble to make me repeat my lessons every evening after supper, and made me tell him in Latin the substance of these lessons. This method is very good for broadening the minds of those who study and making them enter into the thinking of the authors whom they learn by heart."

Even so, Charles took it upon himself to drop out of school when he thought the teachers were being unfair to him and continued to study the classics on his own for several years. Though ultimately trained to the legal profession, it was his ability to write verse that caught the attention of Louis XIV's Minister of Finance, Jean-Baptiste Colbert. Colbert held many other offices and was very much interested in promoting French culture through the arts. Perrault's literary gifts earned him a place in the prestigious Academie Francaise with Colbert as his patron. Besides writing philosophical and political pieces, Charles Perrault would ultimately become most famous as part of a literary fairy tale movement (Les Contes des Fées) that entranced French nobility in the 17th century. His stories were retold with a purpose. Each ended with a moral - sometimes two!

Perrault's amusingly retold stories became known as Mother Goose Tales for the sub-title he gave the collection. He first published the collection under his son's name, possibly for political reasons as Charles Perrault was out of favor with a powerful faction at the time.

You can check out his stories - and their adaptations - here, or read them online at Perrault Fairy Tales.

Andrew Lang on Charles Perrault
Andrew Lang was a celebrated collector of fairy tales and folk tales in the late 19th century. His short, vividly-worded biographical notes are worth reading.

Charles Perrault: Memoirs of My Life, edited and translated by Jeanne Morgan Zarucchi. Columbia: University of Missouri Press, 1989.
An excellent source--not only his autobiography but also an extremely helpful introduction, extensive chronology of his life and works, and contemporaneous selections. Most of the notes our Quick Facts section are drawn from here. Not owned by Central Rappahannock Regional Library, but available through interlibrary loan.