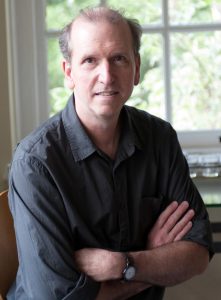 Pick up a handful of David Wiesner's books, and you'll get a glimpse of the kid who knew in third grade that he wanted to be an artist. But not just any artist - an artist full of fun and imagination. He remembers that there were lots of kinds of paintings he'd like to try:

"I'd have turtles with paintbrushes tied to their backs walking around on a big sheet of paper (I got chuckles from the class and the teacher). Or I'd fill squirt guns with different colored paints at shoot at the canvas. I actually tried this with friends. Well, it sounded like a good idea."

He may never have gotten around to the turtles with paintbrushes idea, but his Caldecott Medal-winning book, Tuesday, features frogs zooming around the sky, their lily pads becoming hovercraft. Clearly, David is an unusual guy, but he assures his readers that he was a mostly normal kid who loved playing UFO and army games. Yep, he had a tree fort, too.

Probably the thing that made young David Wiesner (pronounced weez-ner) stand out the most was his ability to draw. In every class, he tells us, there is usually a kid who can draw. In Bridgewater, New Jersey, in the early 1960s, David was that kid. His family encouraged his artistic interest, but David worked very hard at it, too. He loved the instructional T.V. show, "You Are an Artist!" with Jon Gnagy. David bought all of Gnagy's instruction books and practiced every exercise.

By the time he was in junior high school, he was ready to study some art history to learn how the masters had done it in times past. Two art styles - that of the Renaissance painters and surrealism, influenced him the most. In surrealism, artists let their imaginations fly to create something which might be more truthful to the human spirit than simple reality. Surrealistic paintings often look like dreams.

David's Free Fall is an excellent example of surrealism. In a young boy's wordless journey into the realm of dreams, one dream morphs into another in fascinating ways. This is a book where the words will happen afterward, as kids, parents, and teachers talk about where the book led them in their imaginations.

Once David was asked by librarians which book influenced him the most when he was a student. His fast answer was 2001: A Space Odyssey, but the real answer was a little more complicated. First off, he loved the film of 2001: A Space Odyssey. There the film sequences told the story. Very few words were used. When he went back to read the book by Arthur C. Clarke, he was amazed how the film director had been able to tell the story with his moving images.

When he got his hands on The Making of 2001: A Space Odyssey, it was much like a textbook to him on how to tell an important story with images alone. These were lessons he would use throughout his career as an artist.

When David announced to his parents that he wanted to go to art school, they were very happy. He chose the famous Rhode Island School of Design (RISD). He fit right in there. In high school and elementary school, art was never an important part of the school day. Suddenly every day was filled with art. And, every student in the room was a "kid who could draw."

Read More about David on the Web:

David Wiesner: Telling the Story with Pictures
www.bookpage.com/9909bp/david_wiesner.html
In this quick interview, David talks about keeping a sketchbook of ideas.

David Wiesner: The Art of Visual Storytelling
www.houghtonmifflinbooks.com/authors/wiesner/home.html
This page from David's publisher has a section devoted to his creative process and a book page listing some comments from book reviewers and awards he's won.

A Tribute to David Wiesner by David Macaulay
www.houghtonmifflinbooks.com/authors/wiesner/bio/bio2_macaul.shtml
David Macaulay, a famous author himself and one of David's teachers from his college days, gives a fun and fascinating account of his student's life.