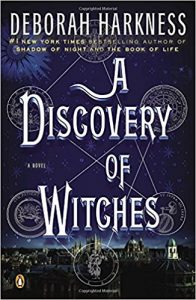 Witch and Yale historian Diana Bishop discovers an enchanted manuscript, attracting the attention of 1,500-year-old vampire Matthew Clairmont. The orphaned daughter of two powerful witches, Bishop prefers intellect but relies on magic when her discovery of a palimpsest documenting the origin of supernatural species releases an assortment of undead who threaten, stalk, and harass her. If you like A Discovery of Witches, check out the whole series, including Shadow of Life and Book of Life.

A Discovery of Witches

British entertainment channel, Sky One, bought the rights for the books to do a television series, which premiered in September 2018 in the UK. Teresa Palmer was cast as Diana Bishop and Matthew Goode was cast as Matthew Clairmont.

Check out titles similar to Harkness' bewitching novels below.