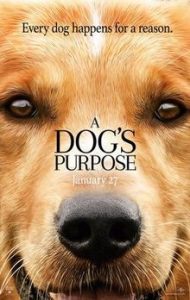 Searching for his purpose over the course of multiple canine lives, Bailey is reborn as a golden-haired puppy after a tragic death as a stray and shares a loving bond with young Ethan before he again dies and starts over.

Nearing the end of his life, Enzo, a dog with a philosopher's soul, tries to bring together the family, pulled apart by a three-year custody battle between daughter Zoe's maternal grandparents and her father Denny, a race car driver.

Wilson Steele is a single professor and Vietnam veteran who likes living alone, insisting it's too late for him to have a family. His mother disagrees. When she impulsively adopts a rescued black lab mix, she insists Thurman is special and has whispered of the coming of grandchildren. Wilson notices Thurman's growls do sound like words, but he knows he's just projecting his own thoughts on the animal. If Wilson is talking to neighbors on their walks and spending time with Emily, a widow with three children, it isn't because Thurman encouraged him. After all, everyone knows dogs can't talk can they?

A heartwarming tale of hope and friendship set during World War II, in which a British farm girl, an American pilot, and a German soldier are brought together by an unlikely hero: a (very cute) border collie.

Teddy is unhappily single in L.A. In between sessions with his therapist and dates with men he meets online, Teddy has debates with his dachshund, Lily, who occupies his heart. Unfortunately, he is also able to communicate with the "octopus" attached to Lily's head, which is soon revealed to be a metaphor for Lily's lethal cranial tumor. As Lily's condition worsens, Teddy faces off with the "octopus", engaging it in a battle of wills that takes on epic proportions. An exceedingly authentic, keenly insightful, funny and ardent tribute to the purity of love between a pet and its human.

A highly original, tragicomic novel as seen through Sirius, an extraordinary dog who helps his Jewish family escape from Germany to California, becomes a Hollywood star, and, ultimately, contributes to Hitler's downfall.

A wise old dog travels through the courts and battlefields of Europe and through the centuries in search of the master who granted him immortality.