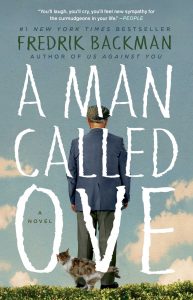 A curmudgeon hides a terrible personal loss beneath a cranky and short-tempered exterior while clashing with new neighbors, a boisterous family whose chattiness and habits lead to unexpected friendship.

A Man Called Ove has been turned into a Swedish comedy-drama film which was released to cinemas in Sweden on Christmas 2015. In the leading role as Ove is Rolf Lassgård. The film was nominated for six awards, winning two, at the 51st Guldbagge Awards in 2016. It was nominated for the Best Foreign Language Film and Best Makeup and Hairstyling categories at the 89th Academy Awards.