Born a generation apart and with very different ideas about love and family, Mariam and Laila are two women brought jarringly together by war, by loss, and by fate. As they endure the ever escalating dangers around them- 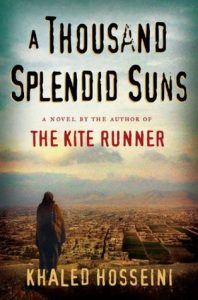 in their home as well as in the streets of Kabul—they come to form a bond that makes them both sisters and mother-daughter to each other, and that will ultimately alter the course not just of their own lives but of the next generation. With heart-wrenching power and suspense, Hosseini shows how a woman's love for her family can move her to shocking and heroic acts of self-sacrifice, and that in the end, it is love, or even the memory of love, that is often the key to survival.

If you like A Thousand Splendid Suns and Khaled Hosseini's other work, you may also like these selections.

Jeo and Mikal are foster brothers from a small town in Pakistan. Though they were inseparable as children, their adult lives have diverged: Jeo is a dedicated medical student, married a year; Mikal has been a vagabond since he was fifteen, in love with a woman he can't have. But when Jeo decides to sneak across the border into Afghanistan—not to fight with the Taliban against the Americans, rather to help care for wounded civilians—Mikal determines to go with him, to protect him.

Sunny is an expat in Kabul who blissfully runs a coffee shop for other Americans in the country. When Yazmina, a pregnant young woman from a nearby village, is kidnapped and later abandoned near the coffee shop, Sunny instinctively comes to her aid. Candace, a wealthy American, also pitches in, while Isabel, a journalist, chronicles Yazmina's woe. Meanwhile, Halajan, a local mother, is reeling from a forbidden love affair.

The incredible true account of Kamila Sidiqi who, when her father and brother were forced to flee Kabul, became the sole breadwinner for her five siblings. Armed only with grit and determination, she picked up a needle and thread and created a thriving business of her own and held her family together.

Zeba's life is shattered when her husband is found brutally murdered. Zeba is arrested and jailed. With the fate of Zeba's life in his hands, Afghan-born, American-raised Yusuf discovers that, like Afghanistan itself, his client may not be at all what he imagines. A moving look at the lives of modern Afghan women, this is astonishing, frightening, and triumphant.

An unflinching, inspirational, and an incredibly moving novel based on the true story of Enaiatollah Akbari, a young boy whose agonizing struggle begins after his native Afghanistan becomes a dangerous place to live. His mother shepherds him across the border into Pakistan but has to leave him there to fend for himself.