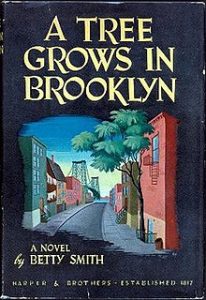 Young Francie Nolan, having inherited both her father's romantic and her mother's practical nature, struggles to survive and thrive growing up in the slums of Brooklyn in the early twentieth century.

A Tree Grows in Brooklyn

Like Betty Smith's classic novel, these adult domestic fiction titles embrace similar themes, such as growing up in poverty in Brooklyn, New York.

For August, running into a long-ago friend sets in motion resonant memories and transports her to a time and a place she thought she had mislaid: 1970s Brooklyn, where friendship was everything. August, Sylvia, Angela, and Gigi shared confidences as they ambled their neighborhood streets, a place where the girls believed that they were amazingly beautiful, brilliantly talented, with a future that belonged to them.

A novel about a girl on the cusp of her teenage years, who is growing up faster than she ever hoped she would. When Teagan's father abruptly abandons his family and his farm, Teagan finds herself wading through the wreckage of what was once an idyllic life, searching for something - or someone - to hold on to.

In this account of two decades in the life of an immigrant household, the fall of communism and the rise of globalization are artfully reflected in the experience of a single family. Ironies, subtle and glaring, are revealed: the Nasmertovs left Odessa for Brighton Beach, Brooklyn, with a huge sense of finality, only to find that the divide between the old world and the new is not nearly as clear-cut as they thought.

Young Lee Goodell's life decisions - to become a sculptor, to sojourn in the mean streets of the South Side, to marry into the intellectual culture of Hyde Park - play out against the crude glamour of midcentury Chicago and the meaning of his four years at Ogden Hall School.

The story of a Brooklyn-born woman's life - her family, her neighborhood, her daily trials and triumphs - from childhood to old age.

View more suggestions for A Tree in Brooklyn.