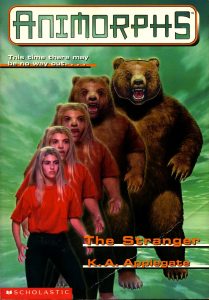 Sometimes weird things happen. Just ask Cassie, Jake, Marco, Rachel, and Tobias. One night they spot a strange light in the sky. Soon they are face to face with an alien from another planet who informs them that the Earth is being invaded by evil Yeerks, and gives them a special power to fight back: the ability to morph into any animal they desire. It is now up to them to save the planet!

Everyone in Vallen knows that ice wolves and scorch dragons are sworn enemies who live deeply separate lives. So when twelve-year-old orphan Anders takes one elemental form and his twin sister, Rayna, takes another, he wonders whether they are even related. Still, whether or not they're family, Rayna is Anders's only true friend.

Byx is the youngest member of her dairne pack. Believed to possess remarkable abilities, her mythical doglike species has been hunted to near extinction in the war-torn kingdom of Nedarra. After her pack is hunted down and killed, Byx fears she may be the last of her species. The Endling. So Byx sets out to find safe haven, and to see if the legends of other hidden dairnes are true.

In a world where every person forms a bond with an animal species upon coming of age, one boy has not found his Animas, but learns of a heroic destiny.

Simon Thorn only recently discovered that he's an Animalgam - one of a secret race who can shift into animals. Now, for the first time in his life Simon has real friends to train and study with at the secret Animalgam Academy. The only missing part is his mother, held captive by his evil grandfather, Orion, who's bent on taking over the animal world.

As a dark force engulfs the land, the fate of Erdas has fallen on the shoulders of four young strangers who each have forged a rare bond with their spirit beasts - a bond that gives great powers to all of them.