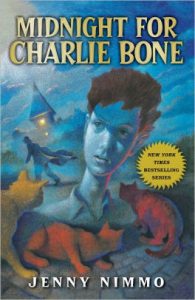 Charlie Bone's life with his widowed mother and two grandmothers undergoes a dramatic change when he discovers that he can hear people in photographs talking.

Magic, mystery, and . . . boarding schools. That's all you need for a fantastical adventure.

On her way, reluctantly, to a boarding school in present-day England, Flora suddenly finds herself in 1935, the new girl at St. Winifred's, having been summoned via a magic spell by her new dormitory mates.

Simon Snow is the worst Chosen One who's ever been chosen. That's what his roommate, Baz, says. And Baz might be evil and a vampire and a complete git, but he's probably right. Half the time, Simon can't even make his wand work, and the other half, he starts something on fire. His mentor's avoiding him, his girlfriend broke up with him, and there's a magic-eating monster running around, wearing Simon's face. Baz would be having a field day with all this, if he were here - it's their last year at the Watford School of Magicks, and Simon's infuriating nemesis didn't even bother to show up.

Emma is used to things going her way. Her father is headmaster of her prestigious boarding school, her friends take her advice as gospel, and she's convinced that a relationship with her long-time crush is on the horizon. As it turns out, Emma hasn't seen anything yet. When she finds an old book in an abandoned library, things really start going Emma's way: anything she writes in the book comes true. But the power of the book is not without consequences, and Emma soon realizes that she isn't the only one who knows about it.

Arthur's life is saved by a key shaped like the minute hand of a clock, but bizarre creatures from another realm are determined to take the key even if it means killing him.

In a world where everyone possesses magical abilities, powerless twelve-year-old Abby, an Ordinary, is sent to a special school to learn how to negotiate a magical world with her unmagical "disability" - and to avoid becoming a victim of kidnappers, carnivores, and goblins ready to prey upon the Ords.