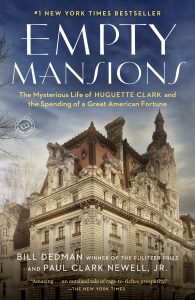 Empty Mansions is a rich tale of wealth and loss, complete with copper barons, Gilded Age opulence, and backdoor politics. At its heart is a reclusive 104-year-old heiress named Huguette Clark. Dedman has collaborated with Huguette's cousin, Paul Clark Newell, Jr., one of the few relatives to have had frequent conversations with her, to tell a fairy tale in reverse: the bright, talented daughter who is born into an almost royal family of amazing wealth and privilege, yet who secrets herself away from the outside world. Empty Mansions reveals a complete picture of the enigmatic Huguette Clark, heiress to one of the greatest fortunes in American history, a woman who had not been photographed in public since the 1920s.

If you want another book about old money, scandalous American fortunes, and mysterious heirs, check out these suggestions.

At the close of the Victorian era, as now, privacy was power. The extraordinarily wealthy 5th Duke of Portland had a mania for it, hiding in his horse-drawn carriage and creating tunnels between buildings to avoid being seen. So when, in 1897, an elderly widow asked the court to exhume the grave of her late father-in-law, T.C. Druce, under the suspicion that he'd led a double life as the 5th Duke, no one could dismiss her claim. The eccentric duke, Anna Maria was sure, had faked his death as Druce, and, therefore, her son should inherit the Portland millions. A lurid, decade-long case was born.

Examines the lives of eccentric hoarders, brothers Homer and Langley Collyer, who lived in isolation and squalor in a Harlem brownstone for years before the discovery of Homer's body in March 1947 and the search for his missing brother.

In 1833, George Bodle, a wealthy landowner, died under mysterious circumstances. Authorities suspected arsenic poisoning. Investigators assigned the Bodle case to James Marsh - an obscure chemist and assistant to Michael Faraday at the Royal Military Academy - who designed a test to detect the presence of arsenic in deceased persons. Hempel recounts the Bodle investigation in detail, bringing to life the various servants, policemen, coroners, and chemists involved in the case.

Born in 1906, Huguette Clark grew up in her family's 121-room Beaux Arts mansion in New York and was one of the leading celebrities of her day. Her father William Andrews Clark, was a copper magnate, the second richest man in America, and not above bribing his way into the Senate. After a series of failed romances, Huguette began to withdraw from society. All her money and all her real estate could not protect her in her later life from being manipulated by shady hangers-on and hospitals that were only too happy to admit (and bill) a healthy woman. But what happened to Huguette that turned a vivacious, young socialite into a recluse?

After the Ninth Duke of Rutland, one of the wealthiest men in Britain, died alone in a cramped room in the servants' quarters of Belvoir Castle on April 21, 1940, his son and heir ordered the room, which contained the Rutland family archives, sealed. Sixty years later, Catherine Bailey became the first historian given access. What she discovered was a mystery: the Duke had painstakingly erased three periods of his life from all family records-but why?