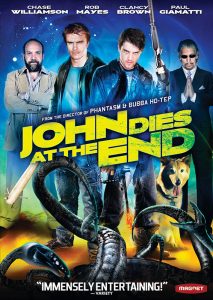 This may be the story of John and David, a drug called soy sauce, and other-worldly beings invading the planet. Or, it may be the story of two beer-drinking friends who live in an unnamed Midwestern town and only think something horrific is going on. But the important thing is, according to the narrator, "None of this is my fault."

John Dies at the End

If you're a fan of dark and twisted humor, these book selections are the perfect match for this bizarre David Won book, which first in its series. The other two books include This Book is Full of Spiders: Seriously Dude, Don't Touch It (2012) and What the Hell Did I just Read? A Novel of Cosmic Horror (2017).

View more suggestions for John Dies at the End.