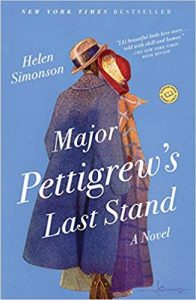 Major Ernest Pettigrew (retired) leads a quiet life in the village of St. Mary, England, until his brother's death sparks an unexpected friendship with Mrs. Jasmina Ali, the Pakistani shopkeeper from the village. Drawn together by their shared love of literature and the loss of their respective spouses, the Major and Mrs. Ali soon find their friendship blossoming into something more. But will their relationship survive in a society that considers Ali a foreigner?

These titles embrace central themes of Major Pettigrew's Last Stand including the difficult title of a widower but experiencing a second chance at love.

When sixty-two-year-old science teacher Edward Schuyler is widowed, he finds himself ambushed by female attention. Edward receives phone calls from widows seeking love, or at least lunch, while well-meaning friends try to set him up at dinner parties. Even an attractive married neighbor offers herself to him. The problem is that Edward doesn't feel available. He's still mourning his beloved wife, Bee, and prefers solitude and the familiar routine of work, gardening, and bird-watching. But then his stepchildren surprise him by placing a personal ad in The New York Review of Books on his behalf.

Returning to Folly Beach, her childhood home, newly widowed Cate Cooper, whose late husband's financial exploits have left her homeless and broke, discovers that it is possible to go home again and discover the person she was meant to become.

It's been three years since her husband was killed in a car accident and Lilian is still getting used to being sane. She's happy just being able to get her two girls to school every morning, keep her illustrating job, and catch up on her favorite TV shows with her sister. Then Lilian's boss asks her to illustrate a vegetable encyclopedia and signs her up for a vegetable-gardening class. Lilian reluctantly agrees and recruits her kids and sister to join her for some drama-free Saturday mornings, because what could be more relaxing than gardening? Nothing ... except that this class is filled with people who like to dig a little deeper than the surface, and an instructor who makes Lillian want to bloom for the first time in years.

For the past six months, Arthur Moses's days have looked the same: He tends to his rose garden and to Gordon, his cat, then rides the bus to the cemetery to visit his beloved late wife for lunch. The last thing Arthur would imagine is for one unlikely encounter to utterly transform his life. Wonderfully written and full of profound observations about life, The Story of Arthur Truluv is a beautiful and moving novel of compassion in the face of loss, of the small acts that turn friends into family, and of the possibilities to achieve happiness at any age.