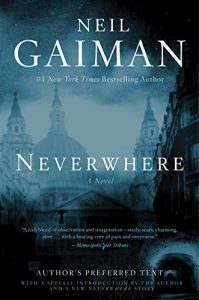 Neverwhere is the story of Richard Mayhew, a young London businessman with a good heart and an ordinary life, which is changed forever when he is plunged through the cracks of reality into a world of shadows and darkness - the Neverwhere. If he is ever to return to the London Above, Richard must join the battle to save this strange underworld kingdom from the malevolence that means to destroy it.

In 1996, BBC Two created an urban fantasy television series based on Neverwhere. It stars Gary Bakewell as Richard Mayhew and Laura Fraser as Door.

If you enjoy the fantastic adventures of Richard Mayhew, check out these urban fantasy titles that will lead you to an underground wonderment.