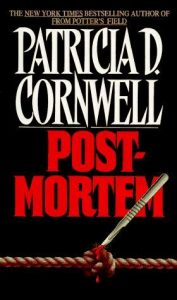 Young women with little in common are being tortured and strangled in Richmond, Virginia. Medical examiner Kay Scarpetta is at the center of the perplexing case, struggling to find the killer, recover vital information stolen from her office computer, and deal with the cops' growing conviction that her lover might just be the murderer.

If the serial killer in Postmortem kept you up at night - just wait until you read these adult mystery titles.

In an ancient tunnel underneath New York City a charnel house is discovered. Inside are thirty-six bodies all murdered and mutilated more than a century ago. While FBI agent Pendergast investigates the old crimes, identical killings start to terrorize the city. The nightmare has begun. Again.

In the small town of Innocence, Mississippi, days are long, nights are fragrant, and secrets are hard to keep. But when a brutal killer starts claiming the lives of the town's most attractive women, lifelong neighbors are forced to wonder if the culprit is a stranger lurking in the bayou - or someone right next door.

It's June in Montreal, and Tempe, who has left a shaky marriage back home in North Carolina to take on the challenging assignment of director of forensic anthropology for the province of Quebec, looks forward to a relaxing weekend. First, though, she must stop at a newly uncovered burial site in the heart of the city. One look at the decomposed and decapitated corpse, stored neatly in plastic bags, tells her she'll spend the weekend in the crime lab. This is a homicide of the worst kind. To begin to find some answers, Tempe must first identify the victim. Who is this person with the reddish hair and a small bone structure?

For ten years, the charmingly disheveled veteran FBI Special Agent E.L. Pender has been investigating the apparently random disappearances of a dozen women across the country. The only detail the cases have in common is the strawberry blond color of the victims' hair, and the presence of a mystery man with whom they were last seen. A sexually charged thriller of extraordinary originality and page-turning suspense, The Girls He Adored moves furiously from the inner recesses of the psyche to its final, startling climax.

In Oslo, after the first snow of the season has fallen, a woman disappears, and a sinister snowman is left in her wake. As irascible detective Harry Hole realizes that this is only one of multiple disappearances, he begins to think a serial killer may be at work - and may be drawing in Hole personally and intentionally.

The Amish and "English" residents of Painters Mill, Ohio was shattered when a series of brutal murders occurred in the peaceful farming community. Sixteen-years later, Kate Burkholder - who survived the terror - has returned to Painters Mill as Chief of Police. When a body is discovered in a snowy field with a similar MO, Kate vows to stop the killer before he strikes again. But to do so, she must betray both her family and her Amish past - and expose a dark secret that could destroy her.